On July 25, 2019, the A51 was closed through Venceslo for the construction of the A51 Undergrounding Project (the "Venceslo Big Dig"), as per the Venceslo Direct 2020. This project demolished the ground-grade A51 through Venceslo and routed it underground, in order to reduce the segmented feel of the city, as well as to allow Venceslo University and Venceslo Village to expand.

Nearly three months later, on October 14, 2019, the project was completed, and the new Blackwood Memorial Tunnels were opened to the public. In addition to this, exits 6B and 7 were reconstructed. Full vehicular service to the A51 was consequently restored. 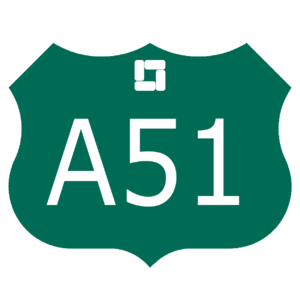 The Official Road Sign for the A51.
Retrieved from "https://wiki.minecartrapidtransit.net/index.php?title=A51&oldid=147702"
Category: