Airchester Airfield (IATA: ACA, ICAO: NACA) is an international airport in the eastern part of the New World of the MRT Server. The airport primarily serves the Epsilon Region, comprising the member cities C25-C26 Airchester, C24 Sesby and C27 Accerton. This is the secondary airport of the city of Airchester. Airport is managed by Punta Airport Company. 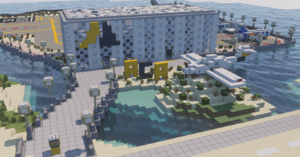 Airchester Airfield used to be a small private airport built before the "only 1 airport per city" rule. It was used by Eastern Airways Flight Academy to train his pilots back in 2015. The airport was soon closed due to financial problems and was later acquired by CaptainChimpy that turned it into an Heliport facility for Eastern Airways Heli Lines. The entire terminal was rebuilt to accomodate the increasing number of passegers. The heliport was exclusive to Eastern, but soon heli passengers started to decrease rapidly and the mantaining cost of the Heliport where too much for Eastern.

On December 30th 2017 the heliport was closed again. The current Helicopter flights where moved to the nearby Epsilon International Airport The Airchester Airport Company bought the heliport and transformed it into an airport again. The main focus was to accomodate low class / startup airlines that couldn't have a spot at the nearbly Epsilon International Airport or that needed gates for their flights around the MRT. After the acquisition from AAC the airport terminal got rebuilt and 1 new gate was added.

Airchester Airfield is situated in the city of Desertville a few meters south of C25 Airchester. The Airport is built on an island east of Desertville. The airport can be reached via the road that connects Airchester and Accerton. AirShuttle bus service runs between the airport and Airchester's MRT Plaza and Epsilon Airport.

The small regional terminal is a fairly small complex. It's main purpose is to get passengers rapidly from the check-in to departures and vice-versa. It features a small check-in and arrivals area on the ground floor and the departure area on the second floor. Arrivals and Departures are separated, and due to lack of space, passengers are required to walk to their plane.

At the exit of the airport there are 2 train stations. One from IntraRail and one from RaiLinQ.

Bus Lines are operated by the company AirShuttle. You can find the busses right outside the Terminal. Frequent services to/from Airchester City Center and Epsilon International.