AlikLolly is a franchise that was founded by Aliksong on New Year's Day 2015. He was unsure of what franchise he should make, and after seeing Rapid Coffee and Kalmar Fried Chicken in the Pumpkin Mall of Easest, Alik decided to create something different- a candy shop. JamesGaming suggested the name of AlikLolly, and the rest was history. Little did Alik know that it would grow to be a very popular franchise, featuring in most major cities and towns throughout the New World. Look out for the distinct black and white checkered design in many cities!

Motto: The lollies are better at AlikLolly.

There are 7 types of stores available to buy for your town/city at very reasonable prices!:

As of 15 April 2015, AlikLolly has entered into a contract with RedGrocer, by hntredtie, and every RedGrocer will have a designated AlikLolly aisle in the confectionery section. How exciting!

Since its inception AlikLolly has proven to be a popular franchise, with 91 stores, including 14 eight storey Regional HQs open on the New World as of 1 February 2017. As of May 2017 this list is no longer updated. They are located at:

There are currently 4 AlikLolly factories on the New World. The factories have the role of refining and producing the high-quality candy which AlikLolly prides itself on. Only cities ranked Mayor and above may request a factory, and Alik will have the discretion as to whether to award the city with a factory or not. The cost of a factory is to be negotiated with Alik, and can range from $50 to $200. Factories are usually 4 storeys tall (Regular) or 6 storeys tall (Large), but other sizes are possible. The factories are located at:

The AlikLolly World Headquarters can be found in the New Commercial District of  XW10  Kenthurst, which overlooks the serene Kenthurst Lake.
On 25 March 2016, AlikLolly opened its Eastern Division Headquarters, which is located at  F27  Marblegate. This will allow the franchise to expand more easily in the New World.

We sell up to 12 varieties of lollies, each with their idiosyncratic tastes. Please note that not all varieties may be available in every store, due to limitations in the size of the store. Each flavour is shipped to Kenthurst Port, then transported to the AlikLolly Production and Storage Facility at the centre of Kenthurst. Extremely high quality control standards are employed to ensure the taste of our lollies are nothing short of delicious.

AlikLolly is proud to be a supporter of a number of activities on the MRT. If you would like AlikLolly to support your event/location, feel free to leave a message on Aliksong's talk page (User_talk:Aliksong) or /mail Aliksong in game. 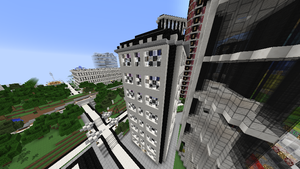 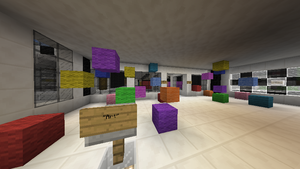