Antioch Rapid Transit uses automated trains made by NewRich Vehicles. Currently, there is only one line called the Blue Line which shuttles passengers through Downtown Antioch.

Antioch Rapid Transit was first proposed in 1985 as Prop E on the ballots in the cities of Bay Point and Antioch. It was proposed to give commuters better public transportation in the region, this was during a time where the bus system was disorganized and the roads were in gridlock. The proposition was passed with a 82% yes vote, construction then started in 1988 and the section between Diamond Bar and City Hall was opened in 1990 as a test portion. The rest of the line is planned to open in 2020. 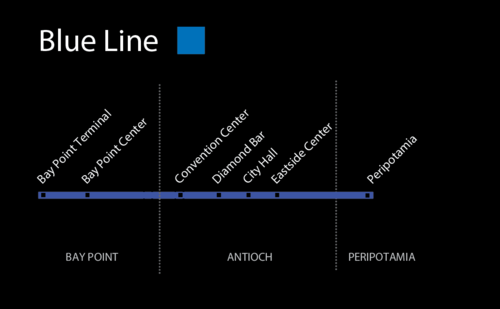