Arbatskaya Moscow, formerly Hanamura, is a town founded and owned by MikeRoma on the New World.

Weather conditions are measured and recorded in Revolution Park every day. Variables such as temperature and precipitation are collected and are released as public domain. The table below shows averages for the data gathered for the last 2 years.

Western Arbatskaya Moscow is located on a beach biome and closely follows the shoreline of the Equinox Ocean. However, city expansion plans will lead the city east, into a nearby forest biome. Arbatskaya Moscow has a very flat topography, with virtually no elevation steps as of now. 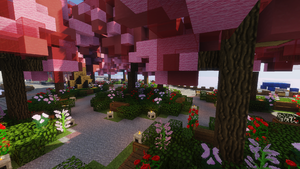 “Revolution Park”, formerly Chihiro Ogino Park, is Arbatskaya Moscow's first and most recognizable build. It is a medium-sized pedestrian park populated with dozens of large trees. The park is a haven for Arbatskaya Moscow residents and tourists alike, and people often come here to relax on a bright sunny day. This park is the site of much of the battles that made up the January Revolution, which was initiated by a sizable Russian population in the previously Japanese town.