These are the beautiful assorted districts of Astoria. We have lots of cultures defined within these beautiful parts of the city.

This is the district of which the current area of Astoria is housed. We have the city hall, many residential houses, Prubourne Steak and Vitamin Drinks Shop. The main intersection is between Hallston Road (North and South) and Redtie Avenue (East and West) 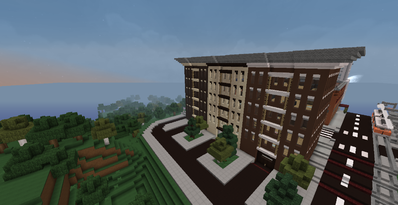 This is the main upper-class residential sector of Astoria settled on Espora Lake and the Espora Sound. You'll mainly see houses from very posh owners with lots of space going for over $1000 MRTD. This sector of Astoria is still W.I.P. or still in construction. Feel free to build a large contemporary, traditional, or Mediterranean mansions only. If it does not look good, fit in, or becomes inactive for seven days without extra notice, it may be marked for deletion.

Murray Square is the main downtown district of Astoria.

Japantown is where all the Japanese culture goes in Astoria. This is where the blue-collar immigrants from Japan work and live in Astoria. The first establishment will be Souzai Daigaku, a shop selling steak croquet and beef steaks. Its name translates to "University of Side-dishes".

Apply for a plot here

All stores must charge 4% extra for all products except for food products to be put into the Astoria Public Works Fund. If it is a restaurant, sales tax becomes 6% plus 15% tip at lunch and 20% at dinner. You must build a realistic, ideally a modern-day city like building. Any immigrants must fill out papers in the Astoria Immigration Office (AIO) at Port Puerto.

Priority of 1 = Will be the main task of immediate focus.

Priority of 2 = Important, but going to be tackled later.