Aviation is a small town founded by Seastep at NE16, on the MRT Northern Line. It was founded on the 18th April 2017. There is currently a lot of construction at Aviation, as the utility roads are rapidly expanding outwards from the MRT Station. There is a bus terminal built on the northern side of the MRT station, while the main buildings are located on the southern side.

Aviation is a member of UNET, United North Easter Territories, which incorporates cities like Titsensaki and Xiiona.

Aviation is in a Forest Biome. The area consists of many hills, which is a challenge for the city government when they're expanding the city. In the western area there is a beach, close to the MRT Northern Line, which is planned to be used as a leisure area.

A leisure area is planned at the southern area, close to a lake. 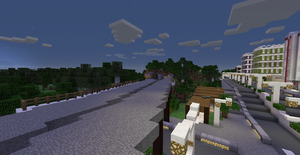 The A and B Express lines under construction, snaking through hills beside Ground Street. 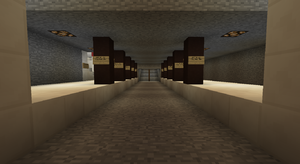 MRT Station is NE16. The fastest way to get to here from spawn is to warp to the NE18 terminus and ride two stations westward.

A highway road has been planned and approved that will pass Aviation on its way to Titsensaki (NE18).

The bus terminal will soon be put into use when the highway is completed with an intercity bus route to Titsensaki.

When the city grows, some inner-city bus routes and metro systems will be built. Construction start for the metro system is expected to happen in Summer 2017.

Aviation Subway is under construction.

The A and B Express Lines are currently under construction, one of five planned lines. NE16/City Hall Stn. is nearing completion, and Soa Blvd. Stn. is also under the beginning phases of construction.