Bawktown is a town located just north of the large jungle biome. It is currently ranked [Mayor] and its mayor is FooteChicken.

The history of Bawktown is somewhat complex due to the fact that part of the town was originally a different town and had a different mayor.

The original part of Bawktown was founded right after FooteChicken became  [Member]  and was looking for a spot to found a town. He started by looking along the MRT Jungle Line and found JN1 pretty quickly as it was the second station he passed through along the line. Foote didn't check along the southern portion of the line as although that section of the line was already built, the track just looped around directly south of J0 and he thought that the southern portion wasn't open yet. Foote then checked all of the other northern Jungle Line stations, and after seeing that they were all claimed, he decided to claim JN1. There were some small problems at first as some people thought that BernCow had already claimed JN1, but when FooteChicken asked him, he said he hadn't claimed the station.

As time went on, Bawktown was slowly expanded. However, there were many problems with the original Bawktown. The majority of the buildings were all the exact same small, boxy, unfurnished house, and it had narrow, messy roads. Obviously, a town like this would have no chance of getting anywhere on the server, and that combined with the fact that there wasn't much space that Foote wanted to expand into (he had tried too hard to avoid landscars back then), Foote soon lost motivation to build in Bawktown. Then, a resurgence of Bawktown development came from a somewhat unlikely source.

Disclaimer: As I wasn't the original founder of Upminster, I don't really know much of the town's history from before I bought it.

One day, when Foote was talking about Bawktown, CaptainObi came to him wondering if he was allowed to build so close to a town he owned at J0. The town, then named Upminster, had recently been given to CaptainObi from EliteNeon when Elite took a break from the server. The staff told Obi that Bawktown was far enough away from Upminster to allow Foote to have a town there, and the conversation ended after that. Later that day, CaptainObi came to Foote with an offer to buy Upminster from him for $50 and take full ownership of the then-unranked town. Foote bought the town, and immediately started thinking of ways that I could connect the new town to Bawktown. Even though there was a large mountain range that separated the two towns, Foote felt pretty determined that he could eventually connect up the towns. As of today (June 3, 2019), the road has still not yet been built, but there are now pretty solid plans for the routing of the road. During those first few days, he didn't really do much development in the new town, but soon started to expand on what was already there and get the town to [Councillor]. This basically brings us to today, as there wasn't really anything major that happened between the councillor promotion and now, excluding the promotion to [Mayor]. 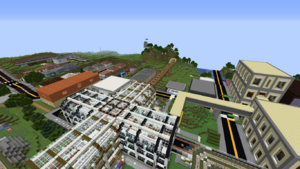 An overview of South Bawktown

The south of Bawktown is built mostly on a plains biome, but the westernmost part of the town is built onto a set of small islands. This makes it relatively easier to expand onto this part of the town as there isn't much terraforming required in order to make space for roads and buildings. The only large hill that even really exists in the south of Bawktown is the hill that the shopping district is built on. There are some other small hills in the south, but the Shopping District Hill is the only hill in the south of a substantial size. 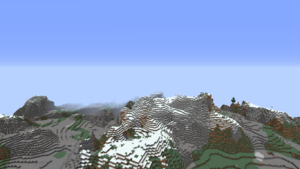 An example of the terrain in the north

The north of Bawktown is basically the opposite of the south in terms of terrain. The north is located in an extreme hills biome, making it much harder to develop on. Many of the buildings that are planned to be located there will be partly built into the hills in order to provide enough space in the flatter areas for roads. When the north does get developed, it will have a much lower density of buildings compared to the south due to the limited space that I will have to build things.

Bawktown is going to have a highly-integrated transport system that will provide rail and bus service through Bawktown and neighboring towns, as well as helicopter services to cities all over the MRT.

Bawktown has a large transportation network that provides access to almost all parts of the town. It is currently made up of 2 metro lines and 1 bus route, but more of each are planned.

Currently, Bawktown does not have many connections to other cities on the MRT aside through helicopter connections. There are some planned rail and bus routes that will connect to nearby towns, but none of these routes have been built yet. Bawktown does, however, have a connection to the MRT Jungle Line and the MRT Expo Line, which both provide their own connections to other towns. As Bawktown is the eastern terminus of the Expo Line, this means that there is also a warp that you can take from spawn.

Highton is mostly made up of smaller houses and is located at the north of Bawktown. 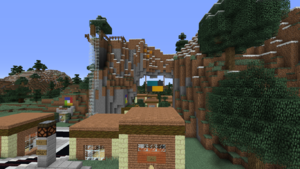 The main cluster of Huts

The Jungle Huts are the first buildings ever built by FooteChicken in Bawktown, and are centered around JN1 station. They are the small, boxy buildings that were previously mentioned in the History. They all have a similar exterior and interior design, and they don't have a lot of interior space. Also located in this district is an AstroSlurp, as well as a tall, narrow hill that a small observation area was built on top of. Another thing of note here is the Bawktown flag, as it was originally hung in this district. 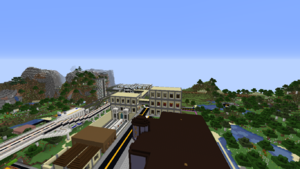 Upminster is the oldest district ever built in Bawktown as the original buildings that are there were built by EliteNeon before Foote even founded Bawktown. It is where buildings such as the current city hall and Bawktown South Station are located. Many of the buildings in the central section of Upminster have a similar design that is made up of sandstone, dark oak wood, and quartz, but some of the newer buildings have a more modern style that is mostly made up of gray concrete. 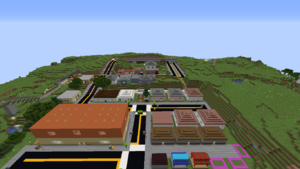 The houses in the Residential District

The Residential District is where most of the housing in Bawktown is located, hence its name. Most buildings in the Residential District have a similar style, but Foote tries to make each house slightly different from all the other houses (there are a few exceptions but Foote already have plans to rebuild those houses). The largest building in this district is the Wooden Estates, which was named after the plan to make it out of all different types of wood. When it was eventually completed, the estates were built only 3 floors high in order to prevent them from overpowering the skyline.

Westminster is named for being west of Upminster. Fictionally, it is the oldest district in Bawktown, but in reality, this is not the case.

The Shopping District is supposed to be the district that contains many of the shops in Bawktown, but it is currently somewhat underdeveloped. 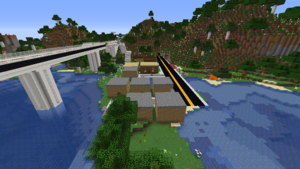 As the name of this district suggests, this is the (fictionally) oldest district in Bawktown. All of the buildings in this district, excluding the metro station, are made out of wood. As this part of Bawktown was originally founded as a small fishing town, this district still has a lot of fishing-related buildings. 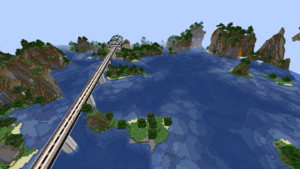 Most of the Islands

The Islands district is a somewhat-wealthier district and is spread across the group of islands in the west of Bawktown. It features many of Bawktown's larger houses, and contains almost no roads.