Beach City is a coastal town in Ward 5 of the New World. It is located on the southern shore of the Elecna Bay on the Delmarva Peninsula, to the east of Boston and the south west of Fort Yaxier. The town's main source of income relies on tourism during the summer months. Due to increased tourism in the recent years, transportation infrastructure is being constructed.

The Big Donut is NOT the intellectual property of FredTheTimeLord, please don't sue.

Beach City was originally constructed based off the town of the same name from a cartoon series, which itself is based off Dewey and Rehoboth Beaches of Delaware. The street plan and basic geography reflects this, as well as certain franchises. Creative liberties were chosen over accuracy, however, in order to shape the town into something small and realistic.

Construction began on May 23rd in single player, and was pasted on the server in a mostly-complete state exactly a week later on May 30th. The pasting of Beach City consisted of 46 schematics, all pasted on a single point in the span of approximately five minutes. After that, it took about two hours in order to terraform what happened to a chunk of Elecna Bay.

The first area built was Thayer Street, starting with It's A Wash and the Big Donut. Following this, Lighthouse Hill was built with the Temple and the Beach House at the edge of the peninsula. Next came building the street layout from Crawford Terrace to Fenton Street. The stores on South Street and Boardwalk Street were made and then the city was expanded all the way to Chestnut Road. Several default homes were made, which were copied and pasted on Waterman and Sussex roads.

A strange event that cannot be explained by science.

Following the creation of Beach City, several franchise spots and homes were opened for claim. An AstroSlurp was built next to Beach City Bikes, a bike shop on Chesapeake Street. Conric005 claimed the first house, and the KIA soon followed, claiming the entirety of Waterman Street for non-specific reasons. Several other people moved in, including several predominate generals of the Boston Royal Army.

An officer greets a law-abiding citizen.

A very brief battle occurred on the West Beach after a raft carrying NBC Secret Service soldiers landed. The Boston Royal Army, protecting the generals, proceeded to attack along with some help from a sketchy moving company. Soon after, the Boston Damage Control cleaned up the mess left behind.

Following the events of the 5-minute war, a secret investigation was held by the Boston Royal Army. A newly elected member of the Beach City Board of Education, one Mr. Bean, had bribed the Beach City Police to come to a spontaneous BOE meeting on the far East Beach with the intent of allowing the NBC Secret Service of gaining control over the town.

Tourism is plentiful in Beach City, but there is no good reliable method of getting there.

Beach City sits on the Delmarva Peninsula in a lukewarm ocean biome, directly off a snowy tundra in the south of the Elecna Bay. There are two bays bordering both sides of the Delmarva Peninsula; the Rehoboth Bay and the Atlantic Bay. To the east is Fort Yaxier International Airport, and to the west is the city of Boston. North across the Elecna Bay is the city of Elecna Bay and Fort Yaxier. To the northwest lies Zaquar.

The Temple sits above the Beach House on the northern end of the peninsula.

The Delmarva Peninsula consists of a flat plane, followed by a hill, abruptly ending on cliffs and a beach by the peninsula's edge. On the cliff lies the Temple, a mysterious structure and a statue carved into the cliff's face.

Situated in the south of the Elecna Bay, Beach City's weather is moderated by the lake, as well as the nearby snowy tundra. The area is uncharacteristically warm for the region, with all the heat from the north sinking south into the Delmarva Peninsula. The cold, surrounding climate creates a contrast during seasons, with warm, hot summers, and cold, freezing winters. The sharp contrast to the local region's climate generates frequent storms in the spring and fall, and melting snow increases the chance of flooding.

Beach City is governed by an elected mayor. The current mayor is FredTheTimeLord. 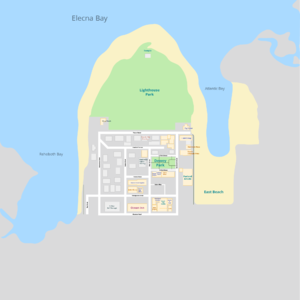 The official map of Beach City and the surrounding area. 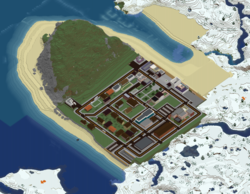 A dynmap view of Beach City.

Transportation is planned for Beach City. A