BearLodge Park is a large baseball stadium in the city of Venceslo, owned by time2makemymove. It serves as home to Venceslo's baseball team, the Venceslo Padres of the Minecart Rapid Transit Baseball League. It began construction on April 3, 2019, and is nearing completion, planned to officially open on April 12, 2019. The seat capacity is 2,334 seats, making it one of the largest baseball stadiums on the server.

The entire stadium was built solely by time2makemymove - however, the baseball field itself was built by Narnia17. It is located in the neighborhood of South Venceslo, just across the

from BLOCKLAND VENCESLO. Upon announcing the construction of the stadium, locally headquartered hotel chain BearLodge Hotels signed a 20-year naming rights deal to the ballpark. FliHigh Airlines is also a large sponsor of the ballpark. The closest VMet station is South & Village station, which is at least 100 blocks away from the actual stadium. It is also served by the VLR (Venceslo Light Rail) with a station just southwest of the First Base Gate and Ticket Office. 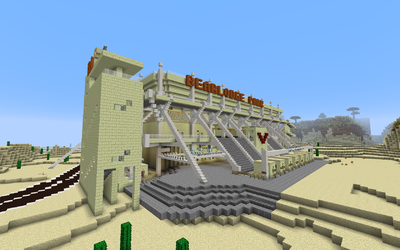 The Main Entry (First Base Gate) and Box Office, on the south side of the stadium. 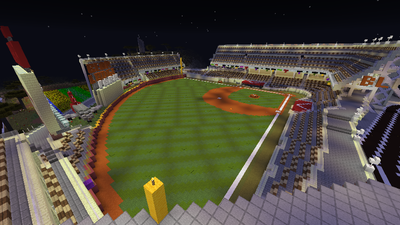 The stadium from the Left Field corner at night.
Retrieved from "https://wiki.minecartrapidtransit.net/index.php?title=BearLodge_Park&oldid=149513"
Category: