Big Brother 2 is the second season of the game show series Big Brother. The season premiered on July 24, 2017 and ended with a season finale on August 11, 2017. This season featured 17 houseguests. MinecraftYoshi26 was the host. On Day 19, AyyLion won the game in a 4-3 vote against mine_man_. The series lasted for 19 days.

The series occurred as a replacement game show after the cancellation of Race To Escape.

The contestants, referred to as "houseguests," take part in several compulsory challenges that determine who will win luxuries and power in the house each week (each week may not be a real week, but rather a game week). At the start of each week, the houseguests compete in the Head of Household (HoH) competition. The winner of the HoH competition will select two houseguests to be nominated for eviction. Each week, six houseguests are selected to compete in the Power of Veto (PoV) competition: the reigning HoH, their two nominees and three houseguests selected by random draw. The winner of the PoV competition wins the right to either revoke the nomination of one of the nominated houseguests or leave them as is; if the Veto winner uses this power, the HoH must immediately nominate another houseguest for eviction. The PoV winner is also immune from being named as the replacement nominee. All houseguests vote to evict one of the two nominees, with the exception of the nominees and the Head of Household, who is only allowed to vote in the event of a tie, in which case they must do so publicly. This compulsory vote is conducted privately. The nominee with the majority of votes will be evicted from the house, after which the cycle begins again. Houseguests may voluntarily leave the house at any time and those who break the rules may be ejected from the house. The last seven evicted houseguests will form the Big Brother jury and vote for the winner during the season finale. Breaking promises and making alliances are allowed in this game. Typically, they are used to advance one game, and hurt others'.

Challenges occur separately, where each have a time frame to be submitted. Voting is also an open time window, where votes are to be cast and are sent to MinecraftYoshi26 privately. Houseguests are allowed to change their vote until all votes are in. If a houseguest does not vote in the time frame and makes no contact with MinecraftYoshi26, they can possibly be ejected from the game. There is no house to be locked in. All social interactions happen through any means, and the game is a side-game to daily server goings.

From weeks two to seven, somewhere on the server was placed Pandora's Box, which was 15 blocks by 15 blocks by 15 blocks. Clues were given in The Van Challenge style that lead to its location, usually a city. All clues were solved using information solely on the wiki or the internet. The box contained a shulker box inside with a twist of some sort that would affect the game, positively or negatively. There was also a sign that explains what the twist would affect (nominations, veto, etc). The first person who found it and chose to make a decision can either accept or reject the twist in Pandora's Box. If accepted, the twist described in the shulker box occurs, if not, the twist does not happen and the game continues normally. The same person was allowed to find the box and make a decision on Pandora's Box as much as they would like.

Not all of Pandora's Box twists and their decider were revealed to the whole house. Boxes in weeks two and seven, the decider was not revealed. For a few boxes, once it was found, it was not told who decided it immediately, as it was not given away who found it. Pandora's Box may have been only been available for a short amount of time. Houseguests were not permitted pick block the shulker box to cheat, break blocks, and had to obey all signs inside. Staff powers were not allowed as well. 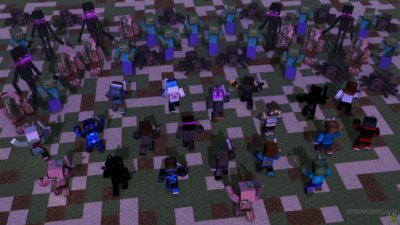 Members could ask MinecraftYoshi26 to become a houseguest only on July 23, 2018. hvt2011, MaxStewartS, MIKE24DUDE, and SoSo123 were originally part of the cast but was erased from the game for various reasons.

1. ^ This competition was also used for the Jury Battle-Back Competition.