Big Brother 3 is the third season of the game show series Big Brother. The season premiered on July 29, 2018 following the finale of The Amazing Race 9 and ended with a season finale on August 22, 2018. This season featured 18 houseguests. MinecraftYoshi26 was the host. On Day 25, Skelezomperman won the game in a 5-4 vote against KittyCat11231. The series lasted for 25 days.

For the first time in any game show, a Discord server was created for the game. Diary rooms were introduced as Discord allowed for such.

During a Head of Household competition, houseguests could take a risk and try to complete a secondary task that may negatively affect their chances to win the Head of Household to win a chance to choose a ? Box. These ? Boxes included game-changing powers and punishments. Once a houseguest claimed a ? Box, they were not eligible to claim another ? Box. There qwre six named choices houseguests can choose from, with half being good and half being bad. Once a ? Box was selected, it was removed from the choices. Some were revealed publicly, while others were not. It began on Week 2 and ended on Week 5. 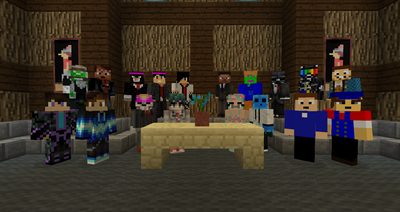 Members could ask MinecraftYoshi26 to become a houseguest from July 28, 2018 to July 29, 2018. Frosty_Creeper10 was originally part of the cast but was erased from the game as he was unable to partake in most of the competition due to time zone differences.