The Birdhall Metro is a rail system operating in Birdhall. It has 6 lines and 36 stations in operation, and 2 more stations in planning*. It was founded by Robang592 on the 16 of October 2015, right after he got promoted to [Councillor].
* Interchange stations counted as two stations.
Map 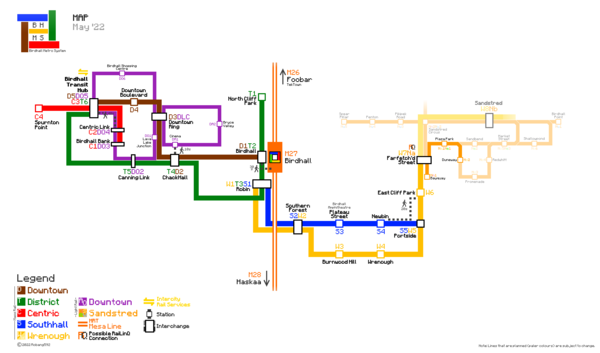 An image of Birdhall with the first 3 stations on the District Line completed.

Robang's previous transit system, the Chack City Subway, was not much of a feat, but he decided to base the metro off that anyway. The lines which are present today were not supposed to be coloured using stained clay in the past. They were actually supposed to use different wood types as lines (eg: Acacia Line, Oak Line, etc). Since the wood types were limited however, it was decided to scrap the idea entirely and go with the present colouring scheme. The Birdhall Metro was already obligatory when Birdhall was starting out. However, due to certain misconceptions about the ranking system, the metro wasn't build until Robang met councillor. Before councillor, exits were pre-built at their present locations, albeit with minor differences, such as how Robin's ( T3 ) exit was supposed to be on the opposite side of the road. The moment councillor rank was given on 16 October, Robang immediately began construction on the first station,  D1  T2  Birdhall.

Back when the Downtown Light Rail's A Line first opened.

Stations were built very rapidly, with 3 stations already opened 2 days after construction began. A new line, the  District Spur , which would later become the  Southhall Line  was built on the 21 October. At this point, only 5 stations were in the works for the metro system. On the 22nd, the full planned system for the small but growing city was built -- 5 stations, 2 lines. The headquarters was built shortly after, on the 30th, at Robin Road. In November, the  Downtown Light Rail  was concieved, the  A Line  being the first to open. At the time 4 lines were planned for the light rail: The A, Q, V and W Lines. The present two are amalgamations of those 4 lines. A depot was built on the 13th, storing rolling stock for the two lines. The  Downtown Line  was now growing fast, reaching up to Downtown Boulevard ( D4 ), as well as the  District Line , which was now up to Canning Link ( T5 ). The  Q Line  had now also reached Canning Link ( DQ3 ).

The detour to Spurnton Point was a consequence of the claim.

The Birdhall Mainland would have seen an extension going north back in 2015. Known now as the Centric District, it was going to be a bustling extension to the Downtown Estate, complete with its own visitor centre. But, as you can see, this was not to be. Another player soon claimed the area north of Birdhall. This prevented any further extensions north of the transit hub area and halted several plans. One of these, unfortunately, was a rail line. The  Centric Line  was actually going to be very long, spanning more than the current four stops. In fact the station Spurnton Point ( C4 ) was never in the original plan. It was only after the player's claim that the line was detoured to a newer extension of the city to the west. It was a giant hiccup, and the line is now a short stub coming out of the light rail tracks.

This natural formation made it perfect for a transit hub.

After the flop that was the  Centric Line , Robang knew the next thing that was coming up needed to be huge and successful. So, the Birdhall Transit Hub was created. It is built in a very nice natural valley in the mesa which was only modified very minorly during construction. All lines but the  Southhall Line  connect to the hub, and a few connections to other towns are in the works. Among those was the RegionalConnect Mesa Railroad, which has since been cancelled after RL's leave from the server. The transit hub is still relatively empty but will probably see development in the next few months.

Nothing really happened for a few months, since all plans were, again, completed. Then, suddenly, the new Southhall Districts were created. The plan was to extend the previously dormant  District Spur  to the south, but this was soon retracted since the line colours were confusing and signage was limited. A new line was created: The  Southhall Line , which took over the one station spur line. You can still see areas of Southern Forest ( S2  where the original line's colour is used. In the coming months, three more stations were built on the south plateau of Birdhall. Another two above-ground stations were built with experimental track designs, each with a very narrow stature. In only 2 months, the line was completed. Another milestone in the metro's development.

In early January 2016, Robang posted a new video to his channel where he showcased the Birdhall Metro at the time. It quickly gained views in the hundreds, now being one of the top videos on his channel, with over 30K views. Soon enough, people started suggesting new lines and joined the server. One of these comments posted on 14 June 2016, prompted Robang to start a new line that would serve further south of Birdhall, reaching the city limits. It became the now recently completed  Wrenough Line . Although not verbatim to the suggestion, it still shows how the internet can bring things to life and influence others.

Onward to the Future (Present)

With little development to Birdhall in 2017, not much occurred. The  Wrenough Line  had, at this time, made it all the way to East Cliff Park ( W6 ) and a new station in the Sandstred Estate, named Farfetch'd Street ( W7 ). However, this station would remain disused until further development took place in the area. In the works now is another light rail system that will cover the new estate, spanning across two branches. Coloured orange, the new  Sandstred Light Rail  will accompany the road network of the area, cutting across paths and junctions in a "open transit network" style. For now, though, development and late stage planning are still in progress.

The Birdhall Metro has 5 mass rail lines. Typically, mass rail lines have gantries and larger, longer platforms than light rail lines. They mostly have very basic call-cart systems, using a dispenser block which ejects minecarts toward the platform. However, players must note to remove their carts when leaving, since there is no cart return mechanism.
Note: Station coding that is italicised represents a station that is under construction/planned.

Good service
The Downtown Line goes through the more urban area of Birdhall. It is coloured brown, a reference to the Singapore MRT's Downtown Line, which was originally coloured brown. This line was planned to open first, but there was a lack of buildings further west where the line was going, so it was shelved for a while. There are 5 stations on this line.


The District Line goes through various districts throughout Birdhall. It is coloured green, a reference to the London Underground's District Line. There was a problem with the coding of the line because the Downtown Line and this line started with "D" so it was changed to "T". There are 6 stations on this line.
On the other hand, the District Spur was a 1 station spur off the District Line, which started at  T3  Robin. The line only had one station and there were plans to extend it. However, the line colours were confusing for some players, so when it was time to extend the line, it was made into the  Southhall Line  instead.

Canning Link station on the District Line, which is a replica of the Thomson-East Coast Line station, Napier, in Singapore.

Good service
A line that travels around the Centric District of Birdhall. It has 4 stations.

Good service
The  Southhall Line  serves the southern portion of Birdhall and replaces the  District Spur . This line can bring you to Birdhall's current landmark, the Birdhall Amphitheatre. There are currently 5 stations on the line.

Good service
The  Wrenough Line  is a line that goes through the south-western portion of Birdhall. The name "Wrenough" is a portmanteau of the words "Wren" (a species of bird) and "Borough". This line is coloured orange-yellow/gold and contains 6 confirmed stations, and an extension to the southeasternmost parts of Birdhall is in the works.

Light rail lines are lower capacity lines aimed as feeder services for specific areas. They do not usually have gantires, and stations are smaller in size and complexity (i.e., no call cart systems are implemented). They are thinner-stroked on maps. 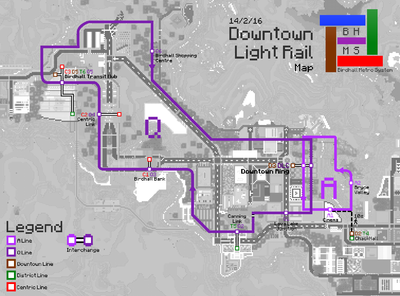 A map of the Downtown Light Rail in Birdhall.


The Downtown Light Rail are 2 lines that go around the downtown district of Birdhall. It is very loosely based off the Hong Kong MTR Light Rail. There were originally 4 lines, the A, Q, W and V lines, but there were a lot of lines to manage, so the Q line was extended to a loop with the W Line. The V Line was cancelled. These two looping lines join at the Downtown Light Rail Central Station (DLC) at Downtown Ring. An interchange with  DQ7  D4  Downtown Boulevard was cancelled, due to close proximity to other stations.

Canning Link station, above ground. The purple section is the Q Line. 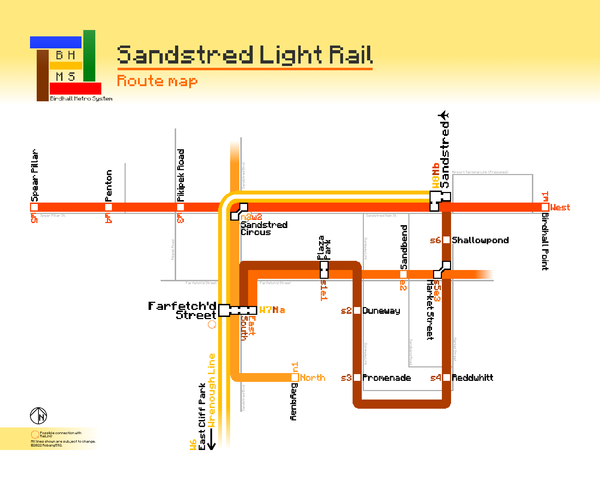 A map of the Sandstred Light Rail in Birdhall (The airport notated is only speculation).


The Sandstred Light rail system is an above-ground network of low-capacity lines that will serve the currently developing Sandstred Estate to the east of Southhall. It will be much like the  Downtown Light Rail  in that it will consist of a few split branches of lines that loop and intersect at two central stations. Designed in an "open network" style, the tracks will cut across paths and raods, accompanying the network of transport in the general area. The line is coded  N , and station codes follow the rule   N (cardinal direction) (station number)  , where the cardinal direction is the first letter of the branch in lowercase. The central stations,  W7  Farfetch'd Street and  W8  Sandstred have their directions labelled a and b respectively and the number removed. The lines are still in a conceptual stage and are subject to change.

The Birdhall Transit Hub has the  Centric Line ,  Q Line ,  Downtown Line  and  District Line  connecting to it, as well as third party rail lines.
There are several bays where train lines can be built.
The following sortable table shows all 8 bays and their respective claimants.

There is also a small bus bay with 2 free bays that can fit buses of at most 3 blocks wide.
The following sortable table shows all 3 bays and their respective claimants.