Blagovka, or That-town-that-I-can't-put-in-chat-without-at-least-one-spelling-error, is a pro-meme anti World edit incorporated town founded by DaEdwards on the Savannah Line at  H27  Foobar on April 16, 2019, the day the MRT was updated to 1.13.2. It is currently [Mayor].

Blagovka is notable for being one of the most weird towns on the server, as it worships memes, has a giant cactus trash dump, and doesn't have buses for its bus stops.

1. Due to the law of August 3, 2019, all W/E (with the exception of //stack) is banned in Blagovka and its environs. Franchises will need to have a "Custom" setting, or they are not allowed to operate in Blagovka. This does not apply to already existing buildings.

2. Not really anything else.

Note: This is how history is taught in the Blagovka School Curriculum. Don't get mad at me for saying false things, this is how the teachers want the history to be, so yeah.

On October 4, 2014, the New World was created by our Great Lord Frumple and his minions. For now, the savannah in which Blagovka sits in didn't exist, it was part of nothing, which means that nothing is nothing so we don't exist oh noesss

Anyway, after a few years, the MRT world was getting overpopulated, so Thanos proposed his idea that half the population should die. Frumple said, "Nah" and decided to expand the world, which took effect in 2016. Thanos then decided, "Let's sell some Thanos Juice!", and everyone was happy, including one guy who decided to copy it.

The new giant piece of world was soon colonized by many people, who founded many great cities, as well as some bad ones, like Merced. A new giant savannah area had been created by Epsilon that really nobody was noticing, so, in August 2018, one of the Great Lord's minions proposed the the Line running through the giant savannah area. This was approved, and the Line was built and completed in March 2019.

On December 8, 2018, one of the most important days in humankind, DaEdwards joined the MRT server as a guest. He became a member on his 5th try, and immediately set to work building a town called Oofville in the northeast part of the server. Edwards tried to build an arch, but failed (it didn't look good), and swiftly abandoned the town.

He decided to apply for a Southern Line station, but was turned down on the grounds that Lilshadow59 was using the station for Arcadia. After that, Edwards went inactive for a couple of months. Then, in April 2019, the Great Lord's minions made all stations free to claim on the Line, so Edwards went to the Savannah Line and, after consideration and checking out several stations along the route, ultimately chose H27 as the site of his new town. But then came the dreaded thing...

The day Edwards was going to start building, the MRT server started updating to 1.13.2. Edwards was very upset This is why instead of April 14 or April 15, Blagovka was founded on April 16, 2019.

On April 16, 2019, DaEdwards flew to Blagovka from Deadbush. (He wasn't a citizen yet.) He officially founded the town by building a small franchise called Legionary Foods. 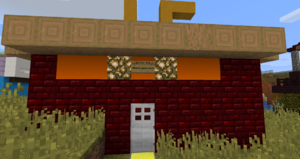 This was meant to be his main franchise, until he realized it would take forever to build. (Now, he realizes that it would have been good if he had known W/E exists). He also built 4 other buildings, two of which were demolished. At this time, he also built the Blagovka Radio Tower, and started building Main Road 1.

The foreign intervention of Blagovka have basically one rule:

1. WE ARE NOT JOINING ANY NATION, SO PLEASE DON'T ASK FOR US TO JOIN YOUR NATION. WE HAVE OUR OWN NATION.

Blagovka is neutral in all conflicts, except for the ones the Union fight.

Blagovka is part of Union of Blagovka. Due to this, Blagovka has a parlimentary legislature which will meet with other legislatures at the King's Union's capital, which has not been constructed yet. Also due to this, DaEdwards is the Tsar of Blagovka, and LegendOfYukari is the Prime Minister, just like the UK.

Blagovka is set among the savannah and grasslands that give the Savannah Line its name. Oddly, right north of Blagovka, there is a giant desert.

Frumpleville is the main commercial district of Blagovka. It is planned to have many skyscrapers and apartment buildings, but as of now, it is a hamlet.

The Dat Boi district is the main residential district of Blagovka. It will have many houses, and 3 schools.

Peckham will be the main entertainment district of Blagovka when it is built. It will contain many different entertainment places.

The Blagovka Police Department is a police force dedicated to serving Blagovka citizens for over 100 years. It resides at the Frumpleville Police Station #1. The police force consists of 16 officers, who mostly sit in their desks and wait until an emergency arrives.

Also inside the Frumpleville Police Station #1 is a cache of Secret Stuff, which is mostly documents.

The main hospital of Blagovka is MojangChan Memorial Hospital. 12 people can be in the hospital at a time. There is also a helipad for emergencies.

Right after getting [Councillor], Edward founded Blagovka Transit. There is currently one bus line that services Blagovka, though plans are for there to be a giant transit network connecting the station of H26, H27, and H28. 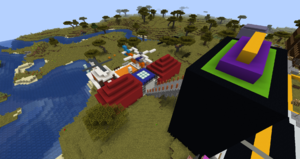 The Blagovka Hirohito City Heliport is a heliport built by DaEdwards and opened on June 25, 2019. It is the main way to get to Blagovka.

Many people think Blagovka's name was inspired by Russian names, and it was. Though, the name was actually meant to be Serbian. During the update, Edwards was not idle. He had to think of names for his city. So he did the logical thing and went on a random name generator for Eastern European towns to see if he could find a good name there. Edwards found the name Petrovka, and then, for some reason, thought about a Russian town called Blagoveshchensk, a town of 215,000 near the border with China. The name Blagovka was born out of the merger of these 2 towns' names. Edwards originally wanted to have a Serbian name for Blagovka, though. He thought that it would be a better name. But, when he thought of the name Blagovka, it was no contest.

READ THIS BEFORE BUYING AN APARTMENT

When you buy an apartment, it will be furnished. You can edit anything you want.

These apartments are called the Suitable Apartments because they include everything a person needs, except for bathrooms (public bathrooms are on the 3rd floor).

Named after the rapper Lil Pump, these apartments are located at 2 Gabriel King Street.

Buildings (not in chronological order)

2. Tallest Radio Tower in the MRT

3. Camelicano the Cow's Stable (will be demolished)