The Cake Cake Bakery (and restaurant) is a food establishment first built in Robang592's single-player world. It is a restaurant/bakery that usually sells cake (by usually, the menu is different in every location, but still has the standard items) and many other items, such as fries and drinks. The first location on the MRT Server was built in Chack City at an unknown date somewhere in 2013. Only a tiny box, this establishment was not planned to be an "actual" franchise. Soon, someone asked Robang592 to build a franchise in his town. This was the first ever actual branch of Cake Cake Bakery, it was built in Rockstone.

Our motto: "There's no set motto because we're lazy."

It is unknown when or how the name "Cake Cake Bakery" was chosen, but it was probably a reference to The Cake Cake Cake Bakery, in an episode of ZackScottGames' Minecraft series. The first building built was in a single-player world, it was a large building that was shaped like an actual Minecraft cake. This building was built before Robang592 joined the MRT server. Later, after joining the MRT, Robang built the first Cake Cake Bakery on the MRT Server, in Chack City. The building is a small sandstone-roofed box, with birch on the side and noteblocks as a wall. It also had a few skylights on the roof. This was not planned to be an actual establishment. Back in the old server, it was very rare for someone to persuade you to get a franchise in their town, so the second branch of the franchise was built a year later in 2014, in Rockstone. Ever since, the franchise has been growing rapidly and becoming more known.

The menu of Cake Cake Bakery varies greatly between branches. Most of it is bascially pathetic puns and jokes. This is a list of most (if not all) menu items across the branches.

Cake Cake Bakeries often have an open-concept design, focusing mainly on quartz, leaves or stained clay. However, if the place where the branch is located has a contrasting theme or doesn't go well with the design, the branch will be modified to a more fitting look. 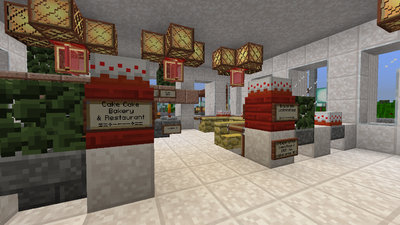 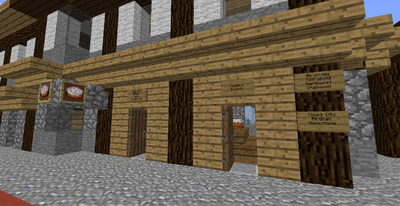