ConnectEAST is the train company for the cities of the Eastern Association of Serendipity Towns also known as EAST. It connects the EAST Cities on the New World and uses the CitiRail version for stations and tracks.

A view of a station from the platform.

ConnectEAST utilizes a new technology, which is the system used by CitiRail also known as Phoenix Project. _frozen is the head conceptual designer and architect of the Phoenix system, with yeamantor providing invaluable and in-depth redstone assistance. Phoenix allows us to bundle many different lines into single trunk line and provide a seamless destination system utilizing AMR Smartpass Destination tickets. It consists of a complex system at the stations, and a simple system in-between stations to operate the track sections. Due to the special technology involved with this system, CitiRail will be mainly an at-grade rail system with rare exceptions of tunneling over long distances and long-distance bridges. 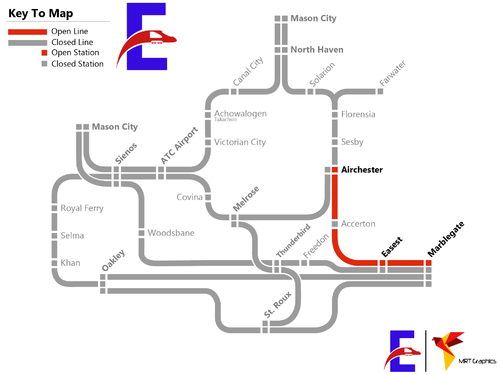 ConnectEAST Map as of January 2015

There are 7 Planned lines (Including 1 Express line) and has been carefully planned to insure that it is the quickest route possible without copying the MRT and achieving redundancy between lines.

These lines are the following: