Cornus is a town located north-west from Central City on the Gamma World at the MRT Taiga and Arctic Line.

It has been founded by unjinz at the start of the Gamma World, on the 4th October 2014.
The whole town was designed to be very realistic and modern, to some extent, and features wide roads with tramways together with reasonably modern architecture.


"Cornus" is abbreviated from the town suffix "Corners", which came from "Grover's Corners", a fictional town in the showplay "Our Town" by Thornton Wilder. 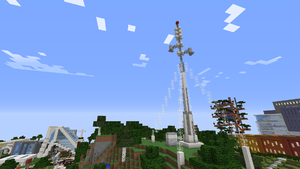 The town is located on two biomes. The biggest part is located in a Forest Biome, other parts are located in a Plains Biome. Most of the terraforming has been done by hand but with close attention to the original terrain. Notable for the town is the Information hill, near the center of Cornus, where a radio antenna, built by RLcrafters, sits on.

Transportation inside the city and outside, is being managed by "vivoTransit", a subsidary of Vanadium, which also acts as the operator for the
vivoTransit Metro Lines. As of right now, transport is done by the MRT, the vivoTransit Metro and the SN19 Bus Line to Spruce_Neck.

The Metro system consists of four lines serving every part of the town. Currently extensions to Xilia Northern and Narona are planned or being worked on.
Transport for Central Cornus is being done by the Ring Line ( 1 ,  2 ) in either clockwise or counterclockwise direction.