Cyra is a city located south-east from R13 on the MRT Red Line. Cyra's mayors are Kiwirainbow and DasNexus.

Cyra is split into the districts: 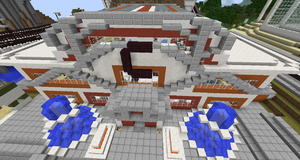 Cyra has many franchises including:

As well as a few independent restaurants including:

The Cyra Metro has three local lines and 2 express lines.

Cyra's airport provides access to air travel in the northeastern part of the city. IntraAir, Eastern Airways, and Viaggio fly out of the airport from its two terminals.