Digipool has relocated to  XE6  Foobar after it turned out  C15  Foobar was already claimed... ;(

Digipool is Thesteakpies town. It is still quite a developing town, but has some great architectural buildings - including the MRT Digipool University.

The build count of Digipool is.....

The D1 is Digipools first interior highway. Its got three lanes, and is the easist and fastest way to "Get Around Town". It has a proud new symbol as well! 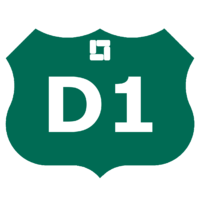 Digipool University is the biggest and most important building in this town. We need to help young minds learn and what a better way to do it than making a stylish, 21st Century, 6 floors high university for them to learn in? It's complete with 2 huge lecture halls, a swimming pool, underground research lab, 3 floors high library, fully fledged computer room, study hall and astronomy tower. It's easy to find your way around by going to the circular hub/lobby and going out to the different branches. As mentioned already, this is being put through to the MRT Franchise Awards. Several people have bought this build for $200. If you are interested in purchasing this build, contact Thesteakpie.

This build has been funded by DIGITECH.

I am currently building a Modern Empire State Building, which is made of grey, and has blue windows. It is 13 stories tall, and will have a few underground floors as well. Each floor is 3 blocks tall, giving a good amount of space to work in. We currently have no pictures.

This is a lane with all of the Embassys on it, as the name would suggest. You can apply to have your embassy constructed here, average cost is $50 and you have a 12x15x(NumFloors) plot. This lane currently hosts; Digipool Embassy, CaptainObi's Embassy

Still needs to be recounted

[Franchises and that stuff]

Also can I mention our franchises in Digipool!

Digitech and DigiFood, Digipools franchise, and embassy has branched out to several towns...

We currently playing host to 9 residents...

The mayor currently owns places of residence in 5 towns/cities

The mayor is Depute to...