Downsview is a town located at  ZS21 , on the Zephyr Line South. It is named after the Toronto Transit Commission terminus on the Yonge-University Line. The founder is WashingtonTdt, and the deputy mayor is Ardyan. It is currently owned by time2makemymove, who plans to act as a caretaker of the town and build a few extra roads.

Mid-January: Downsview Town Hall is finished, and the deputy mayor has been chosen to be Ardyan, mayor of Armada.

February 8th, 2016: Downsview is declared in a state of emergency, as the FAF and KIA are currently battling near the town hall. The Downsview Police Department has also stepped in, while SaRO has intervened as well in an attempt to evacuate all residents and travelers to the LoC town Loudoun, further north. MRT service remains okay as of 6:00PM EST.

June 1st, 2016: The mayor is back and progress resumes after the end of the battle.

December 18th, 2016: Downsview is now connected to the

The following are current town projects:

The Downsview Metro is under construction with two stations currently finished, Central/MRT at the intersection of Pearson and Hamilton, and Burlington, on Burlington Parkway. Trains are operated by the Downsview Transit Commission. The first planned line is the  (1) Hamilton Line .

Several franchises can be found in Downsview, including some that cannot be found in the mayor's first town, known as Loudoun.

This section lists some iconic builds found in Downsview. 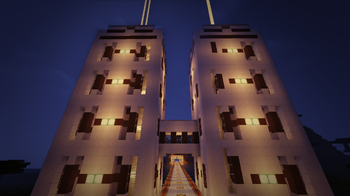 The Downsview Towers at night.

The Downsview Towers are a pair of office towers designed after the Petronas Towers in Malaysia. The path between the two office buildings, found on Lewiston Avenue, crosses over the MRT's Zephyr Line tracks, just below, south of  ZS21  station. The office buildings are yet to be claimed as of November 7th, 2016. 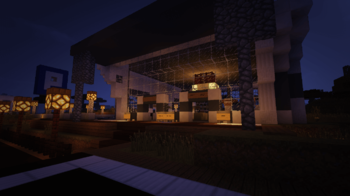 The Welcome Center one day after completion.

into the city. The building is also connected to a large parking lot on Hamilton Street for people who just want to visit the center. The welcome center currently contains a stand for travel information, and 2 restaurants as well as lots of seating, for dine-in commuters.

Downsview has a very small amount of transportation currently, as the town is just sprouting up. All transit is managed by the Downsview Department of Transportation (DDOT).

Downsview Metro - The  (1) Hamilton Line  is currently closed due to construction at Central/MRT to accommodate more passengers for STC connections.

The Downsview Metro is under construction and currently has two open stations: Central/MRT and Burlington. These two stations are the first two stations on the  (1) Hamilton Line . An interesting fact about all the metro lines is that the tunnels are lit up so you can see your surroundings. 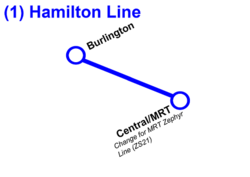 The Downsview Cable Car, operated by the Downsview Metro, is an under construction cable car traveling a very short distance up and down the Great Hill (name TBD) in order to transport people from the top of the hill to the bottom city center.

Downsview is connected to the

provides service to and from Whiteley, Fort Yaxier, Elecna Bay, and other towns and cities in the south. It is accessed by traveling south down Hamilton Street all the way to the end of the road. Follow signs for

The only current method of intercity rail to and from Downsview is the MRT at  ZS21 . Future service to and from Whiteley is planned.