Dulwich was founded in December 2016 by Jian_Zen (formerly tomtomy8) and it is located at  P40  Dulwich Central, straddling a forest biome and a plains biome, and bisected by the Tulse River.It is a member of United Cities. It was made Mayor on the 17th of July, 2017. 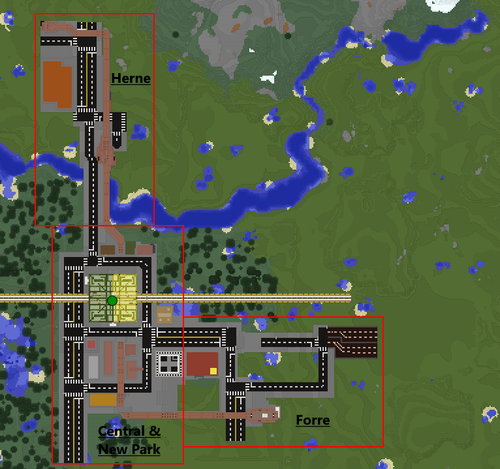 Central & New Park (CNP) is the capital borough of Dulwich, and so is mainly a shopping area. It contains the only MRT stop in Dulwich,  P40  Dulwich Central as well as 3 Dulwich Metro stations, Central, Chemlsford West and Chemlsford North. The borough Councillor is Jian_Zen

Herne is north of CNP, on the other side of the Tulse River (the current only bridge across the Tulse has its name). It is mainly a residential area, however has not been fully developed and there are future plans for large apartment complexes. It has two Dulwich Metro stations, Herne Bridge and North Herne. The Borough Councillor is mervynang.

Forte is east of CNP, and is planned to be a large financial sector. Currently there is not much, however development is planned for the near future. It has 4 Dulwich Metro Stations, Forre Central, North Forre, Meopham Street and St Thomas. It also hosts the warp train station Dulwich Meopham Street. The Borough Councillor is London150.

Dulwich's main form of transport is the Dulwich Metro, operated by Dulwich Transport Services Ltd. It currently has 4 lines with a total of 9 stations, 2 of them being interchanges. Dulwich's main warp train station is Dulwich Meopham Street.

Services on the Tulse are operated by WMB. Currently one line operates in Dulwich.