Epsilon International Airport (IATA: EIA, ICAO: NWEA) is an international airport in the eastern part of the New World of the MRT Server. The airport primarily serves the Epsilon Region, comprising the member cities Airchester, Sesby and Accerton. It is the main hub of the airline Waypoint. This was the first airport built of the MRT Server after the opening of the new world in 2014. It is managed by Punta Airport Company. 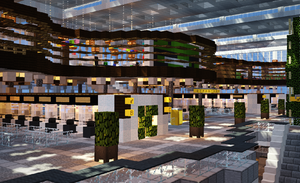 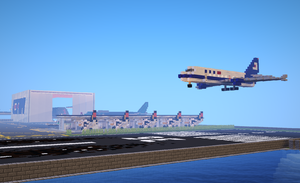 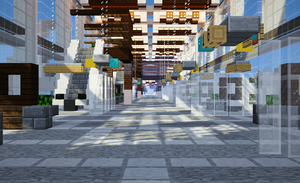 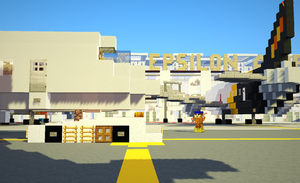 Pushback-complete for this Eastern E190

This is the first airport that was built on the New World after Gamma opened on October 4th 2014. The Airport started construction on 20th December 2014, the date Airchester received the rank of Governor, and finished construction 7 days later on the 27th of December 2015. The Airport featured a main Terminal Hall and 10 gates. Hong Kong International Airport served as the main inspiration for the roof of the original airport. EIA also picked up the Best Airport award at the Second Eagle Awards.

Time passed and more people were starting to build routes and airports, so Epsilon started expanding by adding another concourse for Eastern Airways flights. The concourse was built south of the main Terminal featuring another 8 gates bringing the total to 18 gates. Although the owner Cortesi wasn't satisfied with the design and the amount of space the airport took, Epsilon was still considered one of the best airports on the server. The connections with the airport were fluent and airlines kept on requesting gates. The runway was rebuilt, and was made larger to welcome the new B737 of Eastern Airways's fleet. Other gates were built featuring a bus connection to the main concourse, but that resulted in a waste of time, and soon the airport plan had to be redone.

More flights came to the airport, making Epsilon the most delayed airport of the MRT. A new project was made for the airport. A total reconstruction of the main terminal and 4 new concourses each featuring 8 gates. The project was built and soon Epsilon expanded from East to West. However, Airchester citizens didn't like the new terminal. The construction team had a lot of difficulties building the main road that connected the main highway to the Departures area, keeping the traffic to the airport very slow, and sometimes causing passengers to miss their flight. Many people gave negative reactions to the structure of the remodel. You had to be careful to enter the right security area, or else you could've get stuck in the wrong concourse of the Airport. The automated mover to Concourse A and B was completed but the connection to Concourse C and D was never completed.

The Airport kept it's form for 8 months, and then followed its 3nd reconstruction. A wider terminal was built, adding some new gates for other companies. The wide and open-air building worked perfectly with the city's atmosphere, and it was completed fairly quickly. It featured 2 concourses each with 8 gates, and a middle concourse for the small gates and 2 big gates. Following an update a big gate was removed to make space for a third concourse for Eastern's small planes.

Time passed, and on July 2017, the owner decided to rebuild Epsilon once again, due to high demand from Eastern Airways, which now became once of MRT's largest carrier. Plan was to make the airport underground, but it soon was decided to leave the airport as it was, and try and rebuild the interior portion of it. This stood up for a few weeks, when the Airport completely redesigned it's look with a brand new style. After the rebrand of Eastern Airways into Waypoint, the airport got it's interior fixed and 5 new small gates where added. The current EIA version is version 8 and it features 5 different concourses.

Plans are in place for a future expansion of the airport. After the approval from Staff the Airport is undergoing some major interior changes, as well as exterior. The B concourse will have 6 new gates and the C-D concourses will be rebuilt. There will also be a new addition: an additional Executive Terminal built in the north part of the airport, as well as an underground train station connecting the airport directly to the nearby cities.

Epsilon International Airport is a few meters west of C25, Airchester, and a few meters south of C24, Sesby. When Greater Accerton became part of Epsilon, it joined the management team in charge of the Airport. The Airport is built on reclaimed land because of the lack of space on the Epsilon Peninsula. The Airport is connected to Airchester Station via the Central Metro line. Services at Airchester Station include ConnectEAST trains to Marblegate and Easest, with the main MRT connections being the MRT Eastern Line and MRT Circle Line. The airport can also be reached via the A30 Highway, with a designated exit near the airport. AirShuttle bus service runs between Airchester's MRT Plaza and Airchester Airfield as well as connecting Sesby Central Station and Accerton Spleef Arena.

The airport terminal is based off a beta concept of the Linate Airport in Milan, Italy. The new redesigned structure allow a beautiful, modern, open-wide concept. The big surrounding walls made entirely out of glass allow natural light to illuminate the entire terminal. Being a small-sized airport the connection time between concourses is rapid, as well as the total time from when you pass security from when you board the plane. Signage is updated and very helpful to travel in the airport, and thanks to it you can travel easily and find what you are searching for quickly. Connected to the main terminal we have the A Concourse which is where Waypoint's medium and small planes, as well as other companies, has most of it's flights departing. The B, C, D, E Gates are off-terminal, and they can be reached by shuttle. Smaller planes have their stand in the B Concourse, while C and D are reserved for medium-small planes. Concourse E is where helicopters depart. Inside the Terminal you can find various facilities and a big duty free area. You can find franchises like Troopies, Ptld's Burgers, TacoVilla, Amber's Sushi and Head Emporium as well as the air-lounge Palm Lounges. The main terminal is devided into 3 mail floors. Ground Level: which is the arrivals area, 1st Floor: which is the Check-In/Departures area and 2nd Floor: where you'll find Security and the Duty Free.

The Metro Shuttle runs every 3 min. from the Airport to Airchester Central Station. It is the quickest way to get to town and the main MRT and ConnectEAST rail lines at the main station. The Subway entrance is situated on the Ground Floor (Arrivals)

Epsilon International Train Station entrance is situated on the ground floor in the Arrivals Area. It is based off a Hive-concept, and it is built directly under the airport. It features 8 platforms.

Bus Lines are operated by the company AirShuttle. It connects various parts of the Epsilon Region, as well as Airchester's secondary airport: Airchester Airfield: 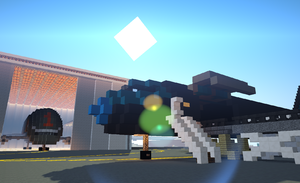 On the tarmac at CargoCity

Situated south of the Airport, Epsilon's Cargo City is the heart of the Epsilon Region. It is served daily by the Evella Skylines cargo planes and the Eastern Cargo Division. The cargo city is mainly used by the Epsilon Aircraft Manufacturing which has its main hub and technical center in Epsilon. Brand new planes are built every day in the Cargo City hangar.