Esti Mi is a metro system that serves the Estify Region (Espil, Pixl, Aprix), Xandar, Vekta, and Kolpino, and is a subsidiary of EstiNet. Esti Mi services in Pixl are planned and operated by Transport Pixl, while services in Espil and Aprix are directly managed by EstiNet. It is part of a larger network of rapid transit systems that span across the Estify Region providing convenient, and fast access to all areas of the region. The metro system is very unique compared to other systems on the MRT, since it uses advanced, multi-cart train technology throughout. Overall, there are 84 planned stations in the system, with 21 stations being operational.

The Esti Mi (and EstiNet) was initially founded on August 29th, 2015 with the founding of Espil. The initial station for testing technologies was built in front of  C80  (Elgin Mills Station). It was decided that multi-cart technologies with screen-doors would be used for the system, since it creates a more realistic scene for a large city. The technology was then moved to the lab world to be able to made into a template for future copy and pasting. In early 2016, the initial four stations of  Line 1 (Genesis)  were constructed (Bayview to Deltix Centre) for a showcase of the new system. Several problems were addressed in the technology after several months of trial operation, and were then deployed in further expansions. In late 2016 Espil Ecilidae Airport was established, creating a need for rapid transit to and from the airport.  Line 4 (Bayview)  was constructed, with extensions from Bayview-Avenue Station to Espil Ecilidae Airport Station.  Line 6 (Avenue)  was also established to connect the inTis West CBD with the rapid transit network. In late 2017, the expansion of multiple cities near Espil prompted the creation of the Estify Region, creating a unified region for shared services. EstiNet's services were expanded to operate in Pixl and Aprix, allowing for further metro expansion.  Line 4 (Bayview)  was then extended to Sulphate Station (Aprix). In mid 2018,  Line 6 (Avenue)  was further extended north through Cephyl, Espil, all the way to Pixl.  Line 7 (Zanski)  was also initially constructed underground, connecting the inTis Arts district and the Deltix Rail Hub to the metro network. In late 2018,  Line 3 (Cormak)  was put into service connecting  Line 6 (Avenue)  with  Line 1 (Genesis)  in Deltix, Eisli. Further expansions to Xandar, Vekta, and Kolpino are also pending. Overall, the rapid expansion of the system will be happening over the next year, as the technology is finalized for deployment.

The multi-cart system that the Esti Mi uses creates a unique set of challenges for the network, since reliability and ease-of-use can suffer from the complicated redstone behind the scenes. However, many safeguards have been implemented to provide for the smooth operation of the system. Screen-doors are present at each station, to prevent commuters from entering the tracks without a train. Each station (except for Elgin Mills Station) contain buttons to spawn trains, and are specifically wired to prevent trains from being spawned in certain events (train is in a station). Each station also contains empty train detectors, which uses multiple tripwire checkpoints to check for whether or not commuters are in a train (with empty trains being deleted). Trains going backwards on tracks are also destroyed by checkpoints in front of each station. Overall, the system is not perfect but contains many safeguards to ensure smooth, normal operation.

The Esti Mi is integrated with the Esti Card, which is a contactless card payment system for transit in the Estify Region. Transfers between other transit systems (Esti Bi, qTrain) are free, as long as they are used within 1 hour of leaving a metro station fare zone. The system uses a "tap-in, tap-out" fare calculation, which charges commuters based on the distance they have travelled in the system ($1 per 1000 blocks). 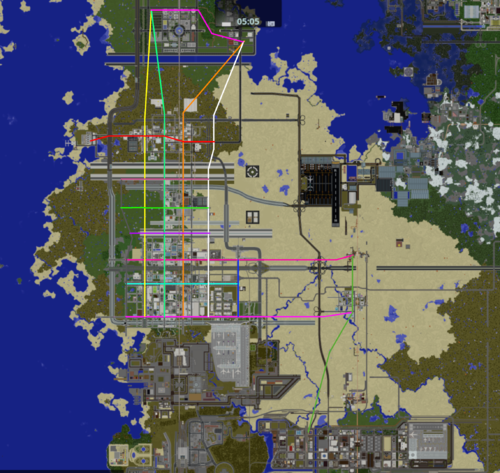 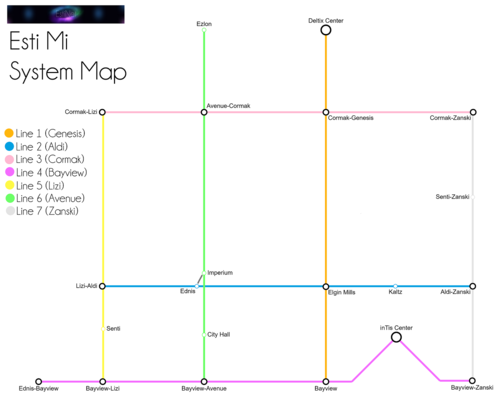 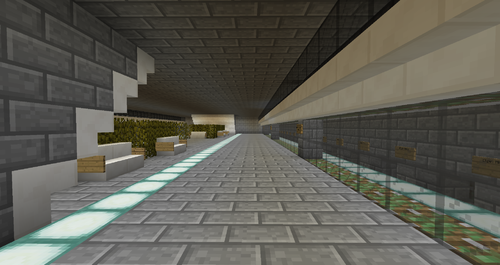 Under construction
Subway line that runs east to west on Cormak Avenue.

Under construction
Subway line that runs north to south on Zanski Ave.

Under construction
Subway line that runs north to south on Koinu Ave, and extends to Kolpino from Espil Ecilidae Airport, via. Waverly junction.

Under construction
Subway line that runs east to west on Ikari Ave.

Under construction
Subway line that runs east to west on Estify Ave (Espil and Pixl border).

Under construction
Subway line that runs east to west in Xandar and Vekta.

Status unknown
Metro line that serves the west side of Aprix.

The construction effort has already been occupied with the construction of the current master plan, so future planning is limited. However, there are plans to create secondary express lines, that criss-cross the system diagonally to provide faster access between stations.