Ezzo City is a Mayor town on the MRT Expo Line, at XW12 station. Al Markaziyah (Ezzo City) was established on September 13, 2015. It is currently work in progress and includes a Governmental Centre and 1+ Mail Centre(s), and the town hall is located in Towers Road. Its mayor is currently ezzocraft and its deputy mayor is allifarki. Ezzo City is one of the only cities which tries to keep away from copy and paste buildings, although stacking is used in 2 buildings. Ezzo City has decided to become part of Storalia on February 8, 2016, so it would receive and give help to other people.

NOTE: This is written from Ezzo's POV. (AKA what he remembers). If there is any mistake, please mail me on MRT Mail and create a book with the subject ECHisCor. I thank you for reading this notice. I once had P4/V4. It was a good place, but I was lazy to build roads. Instead, I made them 1-2 blocks. It had a Starbucks by Mustang_guy, and well, a visiting center, a library and NOTHING ELSE. Scrapped. Fast forward to when I got citizen and got a luxury home in the Premier city of Airchester and some shops using "The Ezzo", people requested me to do a city. I fired up Dynmap, found the XW had some couple of places. I announced my transit from Airchester ALLLL the way onto that swamp area. Alik helped me and let me skip stations (I was in CC at that time, without /spawn!) and put me onto Kenthurst. I took the MRT to XW12 and 13. 13, no claimed. XW12 was put up for auction because echominer99 claimed it and made a road that does not work with ucars with glass in one part. Fast forward to the September GSM I got that station. I probably made Alli deputy mayor because he helped me do something. Don't remember. Then I built the town hall and things. Now go down.

23/23/1923 AD - The Prismarine family sees an expansion. Ducks tried to invade, but their Tonh halling failed.m

2015 AD - echominer99 invaded the family city and makes him this own.

2015 AD - E. Craft sees the city, and calls in his master, La La "Sixty-Seven" Boi and tells him he must participate in the Frumpling agency complex meeting, codenamed GSM. He sends snail mail electronically to the meeting organizer and the owner of the Frumple Nation of the Minecart-based Rapid Transit, F. Rumple. The F. Rumple puts the auction on the agenda, and in september, the Ftaco Rumple allowed Ezzo Craft to invade the city legally. The history begins.

The buildings and areas, planned and done, are:

- Ezzo Tower, an 8-storey building that can host residential space, office and retail space. It houses Natgas HQ, the HQ of business and franchise that is responsible for Ezzo City's gas stations.

- Mail Centre(s): The only mail centre done is in the Mail Centre intersection before Villa Rd. Only citizens/residents of the city can create one for them although all people can send mail to the users of the Mail Centre.

- Town Hall. A building that consists of 2 offices for the mayor and the deputy mayor. It is located in Towers Road and can be entered from 2nd/Station Road, exit A2. 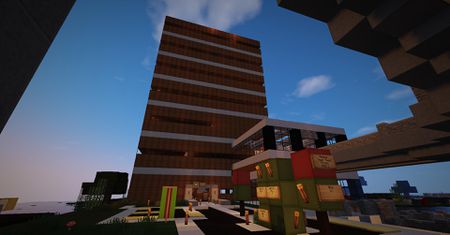 - Saint Roux Embassy, an embassy and a haven for SRX citizens who visit/reside in the city.

- Arisa Embassy, an embassy made by kekkomatic to honor the city of Arisa. 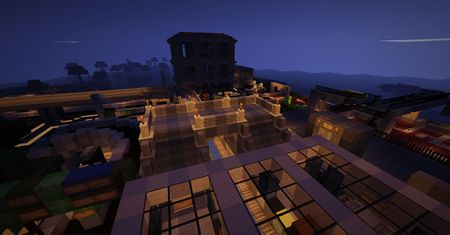 - Governmental Centre: A centre which hosts governmental offices, and most OOC requests are sent to that centre (along with EC's embassy in Saint Roux)

- Embassy Road: A road for an area that is mostly for embassies, hence the name. Most signs on other roads that include emerald will lead to that road. The road terminus leads to the bus entrance for the Central Bus Station lots.

- Villaland: A road for "villas" housed by B3, Villa Station. All people are welcome to pay 5-10$ and build a villa (aka a separate home in the city). The area has a hospital and 2+ businesses and 2+ residents, and hosts the second Mail Centre, adding 22 P.O. boxes to Ezzo City.

-Ezzo City Hospital: NOTE: ONLY EMERGENCY SECTION OPEN The hospital is served by partly B3 and B4, and will have emergency section AND a pharmacy.

-Music's Gems Showroom: bliiiiiiiiingggggYou know what Music's Gems is, and a showroom is in Ezzo City... Um.... It looks and feels great and.... IF YOU HAVE DA MONEY, GO TO DA SHOP

The city has embassies to support citizens while living in other areas. Its embassies design is similar to the first mail centre (which also inspired the Gov'tal Centre). As of now, the embassies are:

- Saint Roux: This is the biggest embassy as of now. It is located in Diplomatique Avenue in that city. It has two floors, includes Natgas, a real estate office for any building sales, a remote Mail Centre, and visa applications in case if a person is blacklisted. The embassy was completed on 7 November 2015.

-Ellesume: The embassy is a smaller one. It includes chests instead of offices due to the little space of the embassy. In some cases, OOC (Out-of-city) documents might be sent to SRX and Ezzo City for further review.

- Helix Bay: The embassy has a sssssecret bunker and some counters to put documents.

- Vermilion: Located near West Vermilion, the embassy is similar to Helix Bay's and has a (Note: FICTIONAL) queue system via your ePhone.

- Kenthurst: A C.P of the SRX embassy, EoEC-KH includes the same services as Saint Roux's embassy and uses KE7 7EZ as its postcode.

Roads are the most common way to transport in-city, with Natgas stations mostly near roads each time. The station is served by West Expo  XW12  Al Markaziyah (Ezzo City) . The main road is Station Road in the Diplomatic Side, with a continuation on Second Road on the Residental side, which both make up the city road E1. The city is linked to the A7, which links to Ilirea, Vermilion, and Central City Also due to its proximity to Kenthurst, E2/B72 which is a B-Road, is complete with a bridge which hosts the Kenthurst metro line and the road. 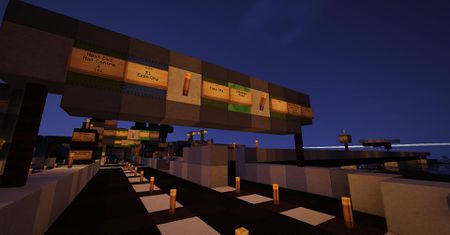 Ezzo City Metro is Opened, and done by Yellowitcher, with four stations and two lines. built. The first one is "Ezzo Tower Station" which will link XW12 (near it), the Town Hall (also near it) and Ezzo Tower, and has a shuttle to the MRT station., XW12 Station (which hosts an AlliFoods). The second one is "Embassy and Govermental Station" which is in the middle of Embassy Road and Ezzo Govermental Centre, and can go there by walking. The third one is "Villa Station" which will transport to the villa area, aka Villaland. A shuttle (S1-S2) leading to XW12 from Ezzo Tower station is done. Connections might be made to Vermilion Metro.

Ezzo City has buses to Kenthurst under the name: Ezzo City Bus, Line 102.

Ezzo Tower is the central hub of Ezzo City's metro, it includes Blue Line, Shuttle, Kenthurst (see below), and is nearby Tram Line.

There are no sidewalks on the road, but there are walkways from Expo West shuttle station to Ezzo City Hospital via the Town Hall, Mail Centre Station, Saint Roux Embassy, B2 Station, and B3 Villaland station. Pathways are also made at the Villaland terminus leading to the Waffle House, Ezzo Tech, Lime Store, Mail Centre #2, and the hospital.

There might be a chance of getting a citizenship document if you reside in a city. If you hold citizenship in another city, it is better to ask the mayor of that city if any conflict will happen between the two documents. Citizenship applications can be sent to Gov'tal Centre (Exit B2). You can use "Ezzo City/Residents" to make sure of the citizenship people.

Attention: This is for the possibility of the usage of VPS, if you want to talk about it, contact ezzocraft in game or post about it in the talk page.

Ezzo City will use the VPS, but it is unclear when. As a limitation, the city only has mailboxes in mail centers "think CC without the distribution centre". Instead of having an address/building, Ezzo City might use forwarding centres to distribute the mailboxes while still being recognized using the VPS. Address might be like this

The first three lines are for guidance only except in the case of using 1TR, which directs to the Town Hall and must include the Directions. If you use xPO in this case, it will take longer because it will be sent to the Centre first then to the Town Hall.

The link with VPS will use the positional location (the first address is an exemption because the mailbox is in the Town Hall). In this example, 10036 is in Mail Centre 1 and will be sent there via the Forwarding Centre. All the mail carrier will do is post the package to the Forwarding Centre and not the address itself. Although TrainPro has a home in Irbid Road #1 (see residents page), it is not used for mail and instead will be sent to his mailbox.

Note: The Mail Centres will handle the domestic postage if needed. The fare will be paid-at-recieving (in most cases) and is strongly recommend to charge this fee at dispatch to Ezzo City.

If not charged, the reciever or sender must pay at arrival to Ezzo City).

'xTR ==> Town Hall/Towers Road address. 1 is for Ezzocraft, 2 is for allifarki's office (Alli does not have a public PO and his home does not have a mailbox), 3 is for AlikSong's Office, 4 is for Ezzo Tower. (use PO 20 if you are using xPo.)

'xVL > Villaland Address. 1 is for Sheikh Zayed Road, 2 is for Irbid Road. 3 and 4 are for two seperate buildings (3 = Officera and 4= EC Hospital)

Ezzo City was participating in LoC as a member (previously observer) before its closure on 1 May 2016, in ways to improve the city and to strengthen relationships with other cities. Ezzo City has seen one urgent meeting (Seaview red alert meeting) only before its dissolving, and no general meetings. It had voted on many resolutions and an election, and was against the resolution that led to the fate of the MPO. The mayor of Ezzo City once proposed the E-road system (used in Ezzo City) to be used in LoC roads and was sent to the public for a vote, but against was the result.

It is now in The Federation and the Northwestern Association of Governments, along with Midwestern SMP Member Kenthurst (presided over by AlikSong). It has voted in one election yet. The city seeks to improve itself and strenghten relationships with others with the help NWAG and The Federation, just like it's goal with the now-dissolved LoC.