Fairfax is a city on the MRT Server located at  G5  Fairfax Station on the MRT Green Line.

The city of Fairfax was originally founded by rklaw999 as Ryzon. On January 1,2014 it was renamed Fairfax to signal a new future in the city charter. Fairfax is now operated by the Fairfax Government headed by Governor _frozen

The Fairfax City Seal represents both the raven, the symbol of Ravenswood's mayor, _frozen, and the teal & grey colors of Fairfax. The symbolism is that it represents the care and supervision of Fairfax by Ravenswood.

The City Hall is located at the intersection of South Mason Drive and Constitution Drive at the coordinates x:1924 y:71 z:-1724. Information regarding the city can be found inside the city hall.

Currently, Fairfax is served by Fairfax Northern Cross, a massive transit hub that encompasses the MRT Green Line  G5  Fairfax station and serves as the hub of MetroFairfax.

For more in-depth history of the town prior to Fairfax, please refer to Old Ryzon wikipage.

Fairfax was originally established as Ryzon by a former member of the server, rklaw999. His buildings were many and was mostly made of iron, glass, and glowstone. Attractions included a town hall, a power plant, gas/rest area, the WRYZ Studios, and a city hall.

On December 21, 2013 a new chapter started for Ryzon when _frozen won Ryzon in the December 2013 Inactive Properties Auction. Soon after, many buildings met the wrecking ball, and some buildings were moved and preserved for historical purposes. A large replanning of the city began soon after, with major road renovations started on December 23, 2013. The only original buildings that survived was the WRYZ Studios and the old City Hall, now renovated.

On December 26, 2013 Ryzon announces that it will be renamed as of January 1, 2014 as Fairfax to signal a new beginning in the future. Named after Thomas Fairfax, 6th Lord Fairfax of Cameron and also the county in Virginia where _frozen used to call home, Fairfax will boast a new modern city with light rail services and a major transit hub called Fairfax Northern Cross to replace the old Ryzon Transit Hub.

By March 2014, Fairfax had more buildings than Ryzon once had, and is now a regional power with excellent relations with its neighboring towns -- Minetown, Atlanta, Galaxyville, Greenway, Hillville, Frost City, and Snowy.

In the month of July 2014, Fairfax annexed two neighboring towns. Frost City and Eagle's Reach came to an agreement with the City of Fairfax Government to be absorbed into the city proper, and they turn into their own districts with their own deputy mayors. MC_Protocol is the first District Mayor of Fairfax, with his responsibility tasked to Frost City.

When Fairfax came in being on January 1, 2014 it was already in the first phase of the two-phased revitalization project of Fairfax. Phase I, which was completed as of February 15, 2014, focuses on the city essentials, including: 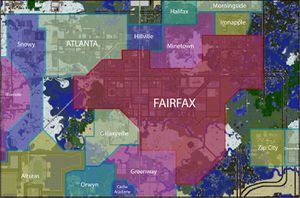 Map of Fairfax City Limits and Surrounding Cities as of July 18, 2014

With the acquisition of Frost City and Eagle's Reach Districts, Fairfax has now faced a real need for a new plan for the future. In order to do this, a comprehensive political boundary map had to be made to ensure boundaries are in the correct place. The map, unofficial and preliminary as of now, shows the city limit of Fairfax and its neighboring cities.

Phase III, the final plan for Fairfax, is now announced. It will include: 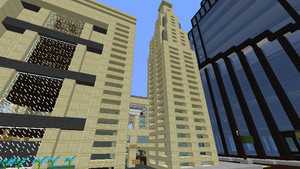 Fairfax City Hall, located at the corner of Potomac Road and Alexandra Street

Fairfax's city government will operate in a city-state government style, with a Governor overseeing the entire city-state, with several District Mayors overseeing specific districts. To use something that fits the standard city government model, the Governor has similar powers as a Mayor, while the District Mayors have the same powers as the Deputy Mayors, but with some more power attached to the deputy mayors. Each District's deputy mayors does not represent the city as a whole, but their own specific district. MC_Protocol is the first District Mayor, overseeing the Frost City District.

Fairfax's Government is headquartered in the Fairfax City Hall, an art-deco building right next to the MRT station. Each District Mayors will have their own offices at the City Hall.

The Governor is responsible for ensuring the town has operational road and transit network at all times inside and outside the town, and runs the Central Business Area of the District. The Governor is also responsible in making sure District Mayors are able to keep up with the overall look and style of the town, and has the power to replace District Mayors at-will. He is also responsible for the inter-city relations with neighboring cities, making sure everything is harmonious with other cities. The Governor also assume the responsibility of the transit network routing through the town, making decisions as needed.

Fairfax is divided into small districts of various sizes, with different District Mayors overseeing the economic development and buildings of each districts. Each district will either have a single unique attraction that gives it a name, or is given its name due to its location. District Mayors are responsible on ensuring everything is maintained, and each buildings should be complete and attractive in a style that will fit into a city of the 1990's and forth. However, recent land acquistions has not followed this trend, and the new district is named after their original town names.

Districts will be formed after the application stage for new District Mayors are completed. Please submit an application to _frozen's mailbox at the Fairfax City Hall. It is located behind the Information Desk, next to where Dolores Umbridge works.

Metro Fairfax Light Rail Stations will be using stations and track systems from AMR Corp called the AMRv2. Pacifica Transit's Phoenix Models will be made available for use in other cities, but was originally planned to be rolled out in Fairfax.

The current Interstates that connect (or are near) to Fairfax are I-0 (exits on I-0 includes Fairfax Avenue and Mason Drive), I-301, I-101, accessed from I-0 and leads to Spawn. The bus system that travels along I-0 and I-301, the MRT International Airport Express also serves Fairfax at stop 3. To get to it, take the warp booth from spawn and visit bay 2 in the station. The other stops include: Parkour, Shadow Falls, Mine Town, and of course the MRT International Airport. Pigs are supplied at Spawn and can be parked at the Public Pig Parking (PPP) located off of Fairfax Highway. If you pig escapes, pigs are also supplied at Fairfax near the Green Line entrance for your return trip back to spawn. Mason Drive (formerly known as Ryzon Highway) services I-0, Hillville, and Greenway stations. Horse Parking stations are located along Mason Drive. For buses, Fairfax Northern Cross also serves as a main hub for the Ender Bus Alliance. 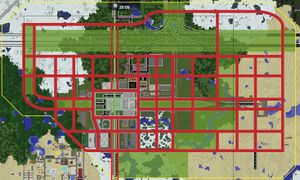 The entire road network of Fairfax has been reworked from its old Ryzon grid. Please see the attached thumbnail for the original road map of the Fairfax Road Network. This road map has recieved approval of all adjoining cities, which was important as we share a very close border with Galaxyville and Minetown. Major renovations that have taken place includes:

Fairfax serves as the headquarters of the Fairfax Stock Exchange and several other business has also called Fairfax home. For a full listing of all businesses in Fairfax, please consult Fairfax/Businesses. Fairfax provides elegant and modern buildings for your business to move in, and there are always space for any size of businesses, from mom and pop shops up to megacorporations!

Fairfax appeared on the first season of The Amazing Race as the location of the final challenge (more specifically the Fairfax Stock Exchange building) and the finish line.