Federated States of the New World

The Federated States of the New World, also known under the abbreviation F.S., is a country on the MRT. In essence, it nods to both the U.S. and EU.

Founded by ondist, the F.S. aims to create a fun and peaceful community with more specific collaborative projects than independent MRT members.

To join, please ask a member and they will give you a link to the Discord server, or get it on the MRT Discord Server. Once you are on the FS Discord, tell the name of your town and its coordinates (not required but preferable), and you should become a FS member.

If you want to join as an observer, join the FS Discord and ask for the Observer rank.

Becoming a member is easy and quick most of the times.

You can view a list of our laws here, a list of things we have voted on here, and our constitution here.

Any FS member can add a short description of their town here if the said town is in the Federated States.

Villanueva, the birthplace of the F.S.

Villanueva is, just in front of New Dublinium, the largest town in the F.S., while also being the former capital. It is in beach, desert and savannah biomes, located on the northern banks of Heart Lake, and around Mission Bay. The town, founded and cared for by ondist, is also home to the government headquarters. Currently, Villaenueva is ranked Senator – it forms one of the larger towns in southwest Epsilon and Ward 6. Cities nearby include Sansvikk, Gillmont, and Savannah. Apart from it's MRT station, SW26, and a few helicopter connections, Villanueva is isolated from the rest of the MRT's transportation network. Road, rail, and air connections are in the works, with a priority of connecting other F.S. members.

Lanatam is MPolo455's only city. Located in Ward 8, in a fertile plain and near a river, the city benefits from presence of many FS towns in the region: Ludkrona, Hythe, Savage City. If you visit Lanatam, go see those buildings, they are worth to be seen: The Lanatam gardens, the Lanatam Cathedral and the Spleef Arena. Fun fact: Lanatam (Lānātam) means wooly in Latin. This can be explained by the main exportation of the region: Wool. Due to the big distance between Lanatam and the bigger cities of the MRT, the city, even though it is ranked senator, was isolated from the rest of the world for a long time. However, there is now a railway built between Lanatam and Savage City, so now, there is no excuse to not visit the biggest FS town in Ward 8!

Cape Cambridge is PaintedBlue's third town and also his second town in Ward 5. It is located near a cape in southern Zeta and also on the coast of Piedmont Bay on Lake 49, right across from the other FS town of Oceanside. The town is also the capital of the FS state of Meridia. It also is home to the South Zeta Space Center, the main space launch facility for the FSAA. Transportation to the town is mostly done via Cape Cambridge International Seaport, however a MARC rail line is planned. The town is increasingly filling up ever since it reached mayor, and is becoming one of the largest FS towns in Ward 5. Currently, some notable builds in the town include Maxwell Park and the Piazza dell'Unità.

On July 12th 2020, a vote was passed to create a space agency with PaintedBlue as its head. He named the agency FSAA. As of now, there are several upcoming missions, and development of a space station currently ongoing.

At a voicechat meeting held on the 26th of June 2020, crimsonf0x proposed that FS members should build a parliament on his plot in Central City. After debate about what build style to use, it was decided that a build competition would be held on a third party server, which was run by a number of FS members, where the winner would get to paste their build into Central City. As of the 6th of August, the parliament building made by MPolo455 has been pasted in Central City. During the meeting of the 23rd of August, MPolo455 proposed to make a park around the parliament that would be built by FS Members: a community park for members of the MPO. The idea was accepted and the construction of the park began on August 24th. Any FS member can add their own contribution to the park.

Burying forever a historic of tumultuous relations, the Federated States and the Epsilonian Republic decided to merge their respective rail plans into a joint rail project. On November 11th, the text formalizing the agreement, the Rail Accords, was approved in the FS, followed by the ER on December 22nd. The whole project is managed by a company called SICF, itself managed by two project coordinators, one from the FS and the other one from the ER.

Regions are a collection of towns and cities that can govern and plan within their region as a whole. They are recognized through a motion in parliament.

Several rail projects are being built in the Federated States, but the most important ones at the moment are the Northwest connector, managed by the SICF, and Valley Express, both connecting towns and cities of the northwest part of the MRT.

There are various ferry terminals at different settlements in the Federated States such as Beachview and Miu Wan. 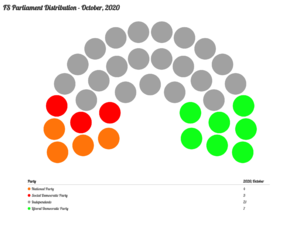