Gemstride is an expansive but peaceful grassy city west of Deadbush, around the middle of the Grand Mesa. It is a city dedicated to a more peaceful suburban lifestyle, which the city's builds represent by being small, but detailed and furnished enough. The roads also reflect the style, as they are andesite roads suitable for bikes and people as opposed to the concrete roads of the rest of the Metropolitan West Mesa. It is a part of the Nymphic Union and the People's Republic of Montego.

The city a mix of grasslands, mesa, desert, and savannah, as most of the town is covered in grass while the areas beside it are composed of the other three biomes. The city has a part of the "Tri-Biome Pass", an area where the mesa, desert, and savannah intersect. Most of Irida is located on hills, Aria's Edge on a plateau, and the rest of the town on the ground. The town works well with the terrain, as the hills in Irida are turned into "layers" where buildings are built on.

The city is bordered by the other cities of Heampstead in the north and Deadbush in the east, and a town named Kota Lembah in the south. It had notable border discussions and agreements with Heampstead and Kota Lembah, the former having borders that prevent more of the plateau being used, and the latter requesting to take most of the desert, pushing Gemstride in the savannah.

The town has a few landmarks, including:

Irida is the easternmost region of Gemstride. Prior to April 30, it was made of two regions, Irida, and Midpeak, which was the area on top of a hill. The region contains the town hall, as well as the Alpha Building, Mages' Tower and the Torch of Peace. It is also home to a mylesMonorail station and the town's library, as well as a few franchises including Tacurger Shack, Italiaso, AstroSlurp, Freshee Tea and 0xcoffee. This region is otherwise dedicated to housing, with six rows of housing in the region. The region also contains boating rentals for people who want to go boating at the nearby lake.

Aria's Edge is the region north of Irida and east of Eleria, located on top of a mountain plateau. Unlike Irida, this region is mostly composed of shops, including Potoe & Chicke, Purple Pidgeon, Ice Tea Vendor and Genso Network. It also contains shops from townsfolk, like a café and a herbal shop. Landmarks located here include the Museum of Useless Art and the Mansion of Heads. The town's spleef arena is also located here, as well as Gemstride Aria's Peak Helipad.

Eleria is the central region of Gemstride, as well as its "business center", as it contains many shops set up by the town's residents. Apart from these shops, it contains a Metropolitan Cafe, AstroSlurp, and Stew Stop, as well as the town's jailhouse, post office, real estate office, and the Elerian Herbal Museum. This region also has a lot of parks, one of which is Wishful Park, another of the town's landmarks.

Lirella is a new district in the west of the Diamond Lake. It contains a MoComm station, and the Indoor Park and the Convention Center. It is planned to reach up to the west of the Tri-Biome Pass, a landmark where the savannah, desert and badlands collide.

Flaria will be a region in the east of the Diamond Lake and north of Eleria. It will be the location of the high school of Gemstride, and will reach up to the east side of the Tri-Biome Pass.

Melodia is a future region east of Aria's Edge and west of Deadbush's Howard District, as well as the planned location of Gemstride Melodia Airfield, otherwise known as GSM.

A typical house in Gemstride.

Gemstride's buildings mostly focus on being more suburban builds using wood, glass, and bone, with a more smaller build size than most towns. Gemstride's buildings usually only have one floor, with the few exceptions being special or important buildings such as the airfield and the town hall. However, the town makes that up for having detailed interiors, with builds maximizing the space in each building to fit every important thing. Some of the builds have regular wooden roofs, while others opt to use a more modern glass roof. The city's newer buildings, being built in a newer time, opt to use sandstone and terracotta along with the usual bone, wood, and glass materials.

Gemstride has a very wide and diverse culture, with Nymphians mixing with Mojangers, People's Republic of Montego, and other people in the city. 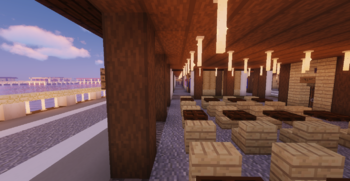 People living in Gemstride value education. The city's academy, the Flarian Academy, is one of the more renowned schools in Ward 6, with the quality of education being high and many different subjects being taught. Students from Ward 6, and occasionally others, move to this school, as they see it as the opportunity to learn much more. With the low tuition cost and high quality, there is only one catch: most students entering the school have to pass an entrance exam with high scores. Apart from the Flarian Academy, the government plans to build more schools in Gemstride, if only to cement its place as a major destination for students. 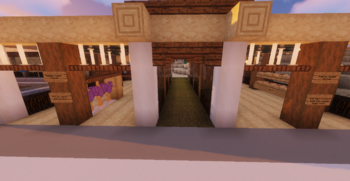 The Magical Mages' Market, a major shop by the city's locals.

Gemstride is known to shoppers as a good place for handmade items, as many shops reside in the city, many of them from locals who set up shop in the town to show their goods. The city has no shortage of foreign franchises either - many franchises such as AstroSlurp and Italiaso are in the city. The city has many cafes, spead around the town in important areas and landmarks, becoming a major part of the town. One of the most notable cafes is Miss Marie's Lakeside Café, one of the first to be made, setting up in the lake separating Kota Lembah and Gemstride. A notable shop in the city is Amethyst Juices, a franchise made by town locals and spread around the city, becoming a favorite of citizens and tourists alike. Comet Cafe also had its roots from the city's cafes, made by Nymphians to spread their craft around the world.