Geneva Bay is a peaceful town along the shores of the bay of the same name, a region of the Eastern Ocean. The town was founded by a group led by Architect_21 during their travels of the server. The town's location was picked after Architect due to its climate, ocean side location, and its proximity to Shadowpoint, New Phoenix, and St. Anna. After a while of building Architect gave Geneva Bay to the deputy mayor EliteNeon who gave it to JustFarkie who quickly got the town to Councillor.

Currently, the town is small but growing and some of the few notable creations are centered around the waterfront and Geneva Bay's man made harbor. The hamlet itself is located in a small valley located in the northeastern mountains in an area that is generally void of most population. The nearest major population centers currently are New Phoenix and St. Anna.

The town is under moderate development with the waterfront area expanding and new districts and buildings being planned and will soon begin construction. The area will also be served by a planned transportation system, which is currently in the works. Two main road connections link Geneva Bay to the neighbouring cities of Hendon and Winterside.

In November 2017, JustFarkie managed to get the growing town to the rank of Mayor with endorsements from godzilltrain and hvt2011 despite the town having just sixteen buildings. A plan for expansion in the hills is currently underway.

A recent archaeological study published by the local museum proved that the area had seen no native habitation prior to its official founding. This is against popular belief which was that the area was originally inhabited due to its protective and fertile seaside location.

The area was officially discovered by EliteNeon, the owner of the nearby small hamlet of Shadowpoint, and one of the people who joined Architect_21's search for a beautiful and practical area to build and grow second town. Architect accepted Elite's offer for the area as it contained all the elements he needed to plan a extensive European town. 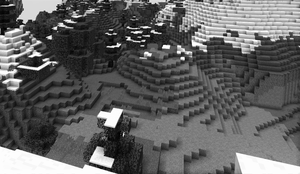 Right after the town was founded Architect quickly reshaped the waterfront by leveling off and raising the shoreline with artificial walls and surfaces. After that, the first structure to be completed in the town was the Geneva Bay lighthouse, a landmark that would last for years. Soon after the peninsula on which the lighthouse sat was developed more including a museum. For the time, the island served the purpose of a meeting place and trading post for merchants in the eastern ocean. 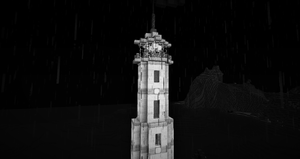 The lighthouse during a storm shortly after its completion

As the intentions of the town changed, more artificial walls were built and eventually the walls closed off an area of the bay on three sides, forming the Geneva Harbor. Along the edges of the harbor, beautiful statues, fountains, trees, market stalls, and artwork were installed to make the area a tourist hot spot.

More recently, Derpy_Melon graciously built a bridge between the lighthouse and the shoreline, completing the harbor and adding on another landmark to finish Geneva Bay. In recent days, the town has seen development beyond the waterfront with a small but lively park and roads being built to help the town expand.

When Farkie1 became mayor of the city he began construction of shops and a housing estate in the mountains to house more people. Farkie has been improving the relationships with nearby towns and cities such as Shadowpoint and Hendon, the second of which a new B-class road is being constructed to. On-going plans for a new partnership with Shadowpoint is also underway. The town rapidly increased in rank gaining Councillor in August 2017 and Mayor in the November of the same year. 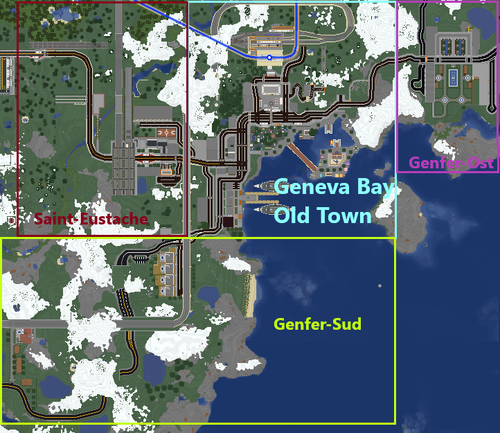 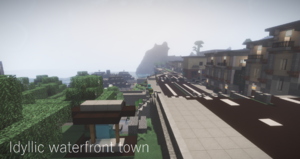 The town is settled alongside a waterfront.

Geneva Bay's original district is situated in the heart of the city, being the old town. The stunning natural harbour is a prime location for a picturesque photograph by the historical town hall or lighthouse. Visit the remains of the Geneve Castle, the historical fortress protecting the New Indigo region of which Geneva Bay was once the capital. Visit the shops along the waterfront or take a scenic boat journey around the harbour. 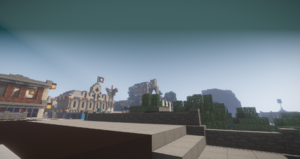 As the city expanded, a new district was constructed. This contains a RaiLinQ station with services to Winterside, Creeperville and Ravenna. More shops and apartments can be found in this area as well as an AlliFoods store and Grape Store. 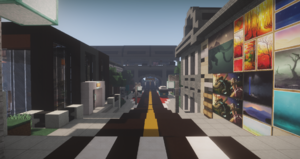 In late 2019, Geneva Bay's authorities planned to expand to the east. However, this did not come to reality until March 2020 when the AlliStar Studio 1+2 was constructed. The Geneva Gardens were then built as well as the shops on Dove Street and finally a bus station. This district is likely to continue expansion over the next few weeks.

In early 2020, Geneva Bay expanded southwards along the road towards Shadowpoint. Several new residential buildings were constructed as well as a green space by the white sand Genfer-Sud Beach. 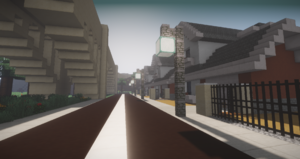 New houses alongside the Geneva Viaduct 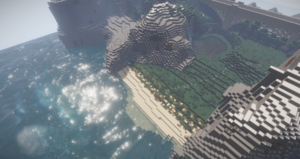 The white sands of Genfer-Sud Beach
Retrieved from "https://wiki.minecartrapidtransit.net/index.php?title=Geneva_Bay&oldid=151029"
Category: