Halua Island is a island with a year-round tropical climate that is a part of an adventure map. The island is home to Kakoa village where residents of a long established tribe continue to uphold island traditions in addition to running the tourist resort. Popular attractions include the volcano shrine, gem caverns and various water activities.

The island is also home to a meteorological research station that studies weather on and around the island. Meteorologists often make use of the resort during the quieter months of the year to live and work on the island.

Due to its warm climate and hospitality, the island resort remains open all year round including Christmas where regular trips leave from Christmas Island each day. 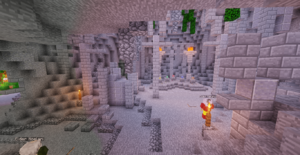 The monument in the volcano, with all five stones intact.

The island's scenery is dominated by an extinct volcano which is believed to have formed the island. The fertile volcanic soil has produced a lush environment of palm trees and bushes which cover most of its surface.

The exact location of Halua island is not currently known, however it is believed to exist somewhere in one of the Eastern oceans in the New World. 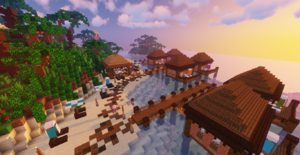 Sometime after the formation of the island an unknown group of early humans built a monument within the now extinct volcano. Several shrines and remains of builds from this time have also been discovered around the island. The best preserved evidence of this era are the five elemental stones which have been uncovered from these shrines. The elemental stones of light, fire, water, nature and life remain under the protection of the island's current inhabitants.

Modern day ancestors of the Haluan tribe predominantly run the tourist resort for which the island is now known for. While some produce is made on the island, the local population rely mostly on imports from the main continents.

Halua Island is the sole location for the Christmas 2017 Adventure map built by thomasfyfe and PineapplePerv. The island was built in the Staff world over the course of the month preceding Christmas. The event was not announced until December 24th when the map was opened to the public, however the transport link at Christmas Island did appear a few weeks before opening raising speculations of the event's existence.

The map is the first of its kind on the MRT to extensively use command blocks and armour stands as non-playable characters. The NPCs around the island can be interacted with using nearby pressure plates. Most NPCs will have one line of dialogue however important characters will sometimes have several.

The objective of the Halua Island adventure map is to collect the five elemental stones from around the island. The player is not immediately told this and is expected to explore the island, interact with NPCs and discover the stones themselves before returning all five the volcano ruins to solve the island's weather crisis. 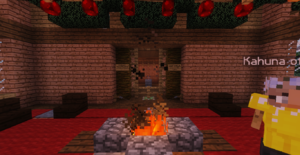 The Stone of Life in the Kahuna's hut.

The Stone of Life can be found locked within the Kahuna's hut in the centre of the village. In order to gain access to the shrine, the player must collect five favours from villagers by helping them through various mini quests.

Dr. Kala can be found in the village's medical centre. Upon speaking with Dr. Kala she asks you to bring some medicine to one of the island's visitors. By interacting with the medicine cabinet, the player will be given a named potion and asked to find the guest who is staying at one of the tourist lodgings on the Southeast of the island.

If the player heads into the Twilight Lodge, they will find an NPC called Mark suffering from food poisoning after the previous evening's seafood buffet. If the player has the potion in their inventory Mark will take it, thank you and then you will be given "Dr. Kala's Favour".

A villager named Tua can be found in one of the resident's lodges at the West side of the village. He will ask you to deliver a Secret Santa gift, a named cookie, to an NPC called Makoa. Makoa can be found beside the pier where the player initially arrived on the island.

Normally Makoa would direct you into the welcome hut however with the cookie in your inventory, Makoa will be accept the gift and thank you. "Tua's Favour" will then be added to your inventory.

Sefina can be found in one of the resident's lodges on the North side of the village. Sefina's hut is located beside a frozen well and when the player talks with her, she explains that she can no longer retrieve water for herself.

The player is required to "buy" a glass bottle from Hahona at the general store then fill it up at the another water well which is not frozen over. Returning to Sefina with a bottle of quality Halua water will remove it from your inventory where Sefina will thank you and will give you "Sefina's Favour".

Manu is one of the island's fishermen and can be found fishing at the rocks on the South side of the island. Upon interacting with him Manu will explain that with the weather he has been unable to deliver fresh fish into town. Manu will ask the player to deliver a raw fish to Waoila.

Waoila is an NPC which sells fresh fish at a stall beside the pier. She will initially explain that she has just sold the last of the fish but if the player has "Manu's Delivery" in their inventory then she will take them from you and you will be given "Manu's Favour".

The player must swim underneath the boat and through a trapdoor to enter the ship. Interacting with a pressure plate in front of some kegs will give "Morgan's Rum" which when returned to Roje will give the player "Roje's Favour". 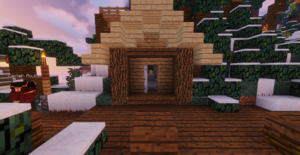 The Stone of Light in its shrine.

The Stone of Life is located on the Northeast of the island under the lighthouse. Access to the shrine is initially locked until the player speaks with Captain Aioli who lives in the hut nearby. Captain Aioli will explain that with the snowstorm, visibility out at sea has been severly reduced. He will then ask the player to assist him in lighting the three braziers on nearby islands in order to warn any sailors of the shallow waters.

The player will be given a flint and steel and will then be required to sail or swim to the three neighbouring islands. A small dispenser nearby can be used to pick up 5 boats to aid in crossing the water.

When the player has used the flint and steel on all three of the braziers, Captain Aioli will shout across the water letting you know of your success. Upon returning to shore, access to the shrine beneath the lighthouse is now open. Inside, the player can find the Stone of Light. 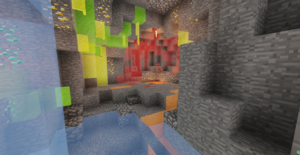 The Stone of Fire in the Gem Caverns.

The Stone of Fire is located in the island's Gem Caverns, a river cavern filled with gems of multiple colors and different kinds of ores. In the cavern is Kalama, warning the player to not be distracted by the sights and be careful of sailing. Grabbing a boat, the player can sail down the river, ending near a pool of magmatic rock. Above the magmatic rock is the Stone of Fire. 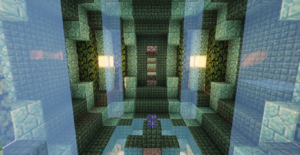 The chamber of the Stone of Water.

The Stone of Water is located in an underground chamber, which has an entrance right beside the service entrance to the Meteorological Facility. Upon entering the cave, players will find fish-like NPCs which speak about humans causing the weather phenomenon. One of them hints a pathway underwater to the main chamber where the stone used to be held. Upon entering the chamber, the player finds that the stone is moved to another location, and that the player must traverse The Water Ways to retrieve the stone. The Water Ways is a slightly difficult water maze, with an exit leading to the Stone of Water. One of the NPCs in the main chamber hints at following the prismarine bricks on the floor, telling the player that it is the right path. This path indeed leads the player directly to the exit along a few air pockets to breathe in. It is extremely easy to drown in The Water Ways if these air pockets are not used. 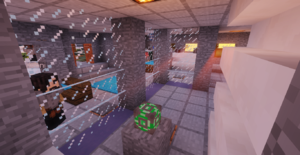 The Stone of Nature in the Halua Meteorogical Facility

It is hinted that the Halua Meteorological facility is somehow involved with creating the weather phonemonon. Outside the weather station two NPCs can be overheard arguing. It is implied that the scientists working at the facility have unearthed one of the elemental stones somewhere on the island. Inside the station the player can find the Stone of Nature behind glass within the lobby.

It is not possible to gain access the stone from the front entrance so the player must leave the building and make their way to the service entrance located in the sea cove.