Heaven City is a city owned by FiorkG.

Heaven City is one of the Largest Unranked Towns in the MRT Server. It was projected to be the Capital of the DRV but it was solved that Totem Beach was going to be.

In March of 2019, with the unification of Fiorkistan and Vulpine Republic, Fiork777 and KingFox decided thinked to make a very new capital to DRV. The 1st option was south of Totem Beach but it was to near to Desert Line Extension. Then Fiork asked to Build East of Titsensaki and Frogggggg accepted. Then in June 4 of 2019, Fiork777 started the construction of the whole new town, starting in the Old Town District.

With the start of the buildings in the Downtown District, The Comercial Economy grew fast. The Olympic Stadium has been built but no soccer matches has been realized there. Buildings Like the Bus Terminal helped in the industrialization and transportation.

With the start of Developements in Central District, Fiork had the (Great) idea to build a main railway station called: Central Station. Then Fiork had an idea to start a Railway Company: The Great Northern Railway-GNR.

This is the district where is located the Old Town and The Border Between Titsensaki and Heaven City. Is Planned to have a Ferry between these both towns. 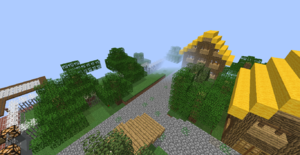 Photo of the Borderline and Houses 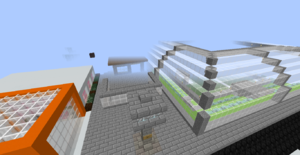 Also known as The Beachy District, The Costa Rica District is where is located the Main Beaches in the Town. Also located there the Diagonal Gas Station and The Alexander Fleming International Hospital. 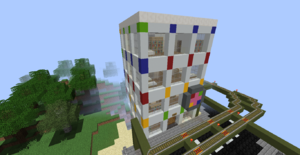 Is where is located some cool Landmarks. The Central Station and The Frumple Brigde. With that name because of the Owner of the Server, Frumple. 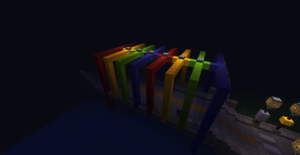 Is where is located the most of the Residences and Hotels in the town. Also will be located there The Starcourt Mall (Because the owner of the town loves Stranger Things), A secret military base under the mall (Because why not?) and will be full of cool beaches, as Costa Rica District.

The only sports stadium in the town. Is Inspired in the Munich Olympic Stadium at Germany.

HQ of the FOXmrt. Is the Highest Building in Heaven City, with 20 floors. Is located in the Downtown District

Is a beautiful, Warmwatered beach located in Costa Rica district.

A brigde Located in the Downtown District. Is built for the 7th MRT Anniversary