High-Speed Rail Corporation (short version: HSR Corp.) is a corporation founded by camelfantasy and Yellowitcher on October 15th, 2016, when the Formosa - Fort Yaxier Shinkansen project merged with MagneLink. The corporation builds high-speed or maglev lines across the server and designs trains.

As a note for passengers, all warps are located at the end of the trainset, on the end where the train is headed towards.

Several high-speed lines lines are powered and owned by HSR Corporation itself: 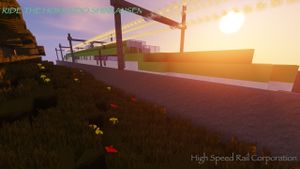 High speed rail between Bakersville and Fort Yaxier based on Hokkaidō Shinkansen in Japan, with stations at Formosa, Segville, and Zaquar. Uses H5 T1c-M2-M1-M2-M1k-M2-M1-M2-M1s-Tsc trainsets. The Hayabusa/Hayate are linked with the Akita/Komachi from Bakersville to Fort Yaxier.

High speed rail between Vegeta and Fort Yaxier based on the Akita Shinkansen in Japan, with major intermediate stops at Horizon Nat'l, Formosa, and UCWTIA. Uses E6 M1sc-Tk-M1-M1-M1-T-M1c trainsets. The Akita/Komachi are linked with the Hayabusa/Hayate from Bakersville to Fort Yaxier.

Laclede and/or Cornus may be substituted for Bakersville and/or Ashmore. 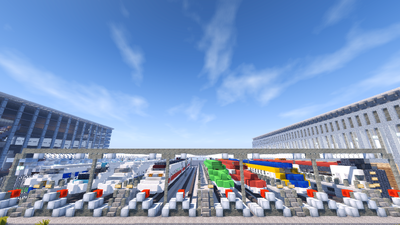 All trainsets (3 cars by default, 5-wide by default and scaled down to 3 by request) listed above are available for sale in the following formats, created by combining one option from the left column with one from the right. Customers need only pay once for unlimited usage of that train type, and can modify the interior and livery as they wish. Pricing is negotiated with the company before transaction/construction and paid for afterwards (generally, the further down an option is on the lists below, the more expensive).

*May or may not be available for 3-wide trainsets

Classified as a train type, usually with a letter + number(s) or simply numbers. Train types can serve more than one service and more than one line.

The type of service the train is running on, i.e. express, local, etc. Services may be run by more than one train type, but only exists once, and on only one line.

This is the physical rail tracks that are built. Each major section is given a name, and major spurs may be named as well. Lines can have more than one train type and more than one service.

A rail yard built in Fort Yaxier showcases most of the rolling stock, albeit in a 3-car formation for all trainsets.