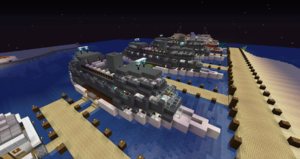 Hummingbird Boat Lines (HBL) is a New World boat company that provides connections between water-linked cities. Founded on September 10, 2016 by MinecraftYoshi26, the boat line was named after MinecraftYoshi26's city of the Hummingbird Islands.

The boats are designed by Technological99 but were leased by hnt for MinecraftYoshi26's usage. The boat had a few tweaks such as the color palate.

Routes are assigned a number and a flower or plant name, usually representing the color of said line. Boats have a minimum of two stops and a maximum of four stops. The company's three hubs are the MRT Marina, Fort Yaxier, and Ilirea. Itokani is set to be one of the the company's new hubs.

_Kastle compiled the ridership data for the company. As of September 28, 2020, the most ridden line is the Rose Line with 469 riders and the most visited port was the MRT Marina with 1016 riders.

The following is a list of all of the Hummingbird Boat Lines lines: