The Hummingbird Islands, founded as Huntington, is a set of islands located on the north-west of the New World owned by McYoshi26. It was founded on October 4, 2014, the opening day of the New World.

The city started off with solely Huntington at station C9, that started mainly as the commercial area. _Kastle had claimed C11, known then as Covina, to lock the island in from other claimants and to start his own city. After some development, _Kastle had decided to move his city to a new location and relinquish his ownership to the current mayor, MinecraftYoshi26. C11 had then been changed to Coronado and became the skyscraper district of the islands. C10 was being closed in, and was later renamed Pacific Grove, becoming the main area of large housing. The Hummingbird Islands Regional Airport on Santa Catalina Island was created by _Kastle and the island is still currently expanding.

Made up of 8 different sections (usually islands or archipelagos), each section was named after either a place in California or a beach in California. The islands are supposed to a somewhat tropical feel with a bustling city in certain areas.

The Hummingbird Islands are located between C9 and C11 on the MRT Circle Line, meaning that its neighboring cities are Newport-on-Tay and Mason City. Other islands in the same body of water include Soiled Solitude. 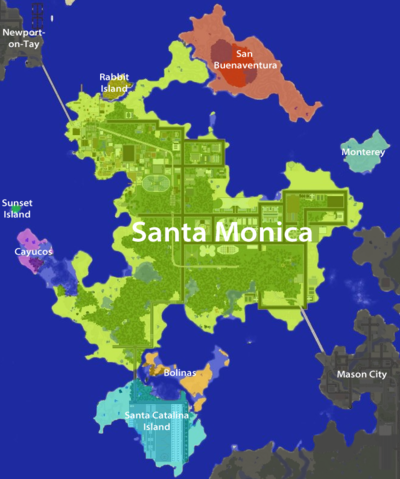