Remember the old days of the metro? Here's a map from the first era of the system! http://bit.ly/Q3xxZr 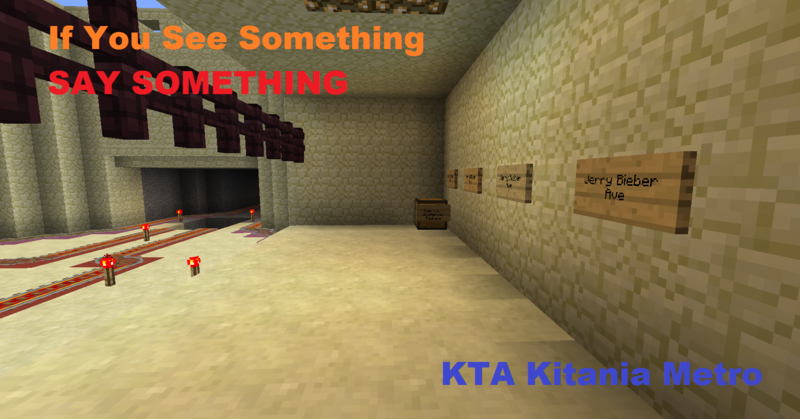 The metro is comprised of lines and shuttles. Lines are full fledged metro services that travel a reasonable length and stop at many stops. These are the backbone of the metro system. Each line is assigned a number and a color. Sometimes, a group of related lines (such as local/express services) will share a color. Shuttles compliment the metro system and is essentially a short line to connect two (or more) full fledged lines, or to connect an area to a full fledged line. Shuttles are assigned a letter and are colored gray. Temporary shuttles are assigned a number following the letter T.

The Kitania Metro is well known to have almost completely redstoneless stations and dark, bare-walled tunnels. We will NOT redstonize the system, so please don't ask for it to happen, and don't ask to do it yourself. All stations are of their own unique design with a similar style. Station entrances display "KTA Kitania Metro" on glowstone, followed by the station name and the lines (with their respective colors) that stop there. The insides are largely made of Quartz (for underground stations), with a checkerboard pattern of quartz and glowstone on the ceiling. The platform is always a block higher than the track. For cart departures and arrivals, terminal stations feature departure by button from the end of the track. Arrivals simply have the cart going into a fire at the end of the track. In non-terminal stations, carts arrive on a slanted rail, with a button to continue. Each track has signage to indicate the line(s) that stop at it. The signage is 3 blocks long. The first sign will say "# LINE" with the line's color, or for shuttles it will show "[Letter] SHUTTLE" on gray. The second sign shows the destination, and the third shows additional information. Some examples in the system include:

Metro tracks are placed on clay correspondent to the line color, or gray for shuttles, in both stations and tunnels. Tunnels, in an effort of realism, are completely bare, with the only lighting from redstone torches that power the tracks.

This was one of the first metro lines, and serves areas along Freeway Lane.

This line follows the path of the 1, making express stops.

This line travels from the Condo Tower through downtown. It originally terminated at Kitania Space Center before being extended to Jerry Blvd - WTC, which was replaced by a 6 Line reroute causing the 3 to once again be shortened. It now goes to Restaurant District West and shares most of its route with the 8 line.

This line is an express line to connect the North and West Transit Centers.

This is a local line to connect the North and West Transit Centers.

This line runs local in the North Transit Center, then diverts from the 4 and 5 to meet up again at Jerry Blvd - WTC.

This line evolved from the former D SHUTTLE, and uses track formerly used by the 6 LINE before reroute.

This line is a connector between Grand Park, the Residential District, and the Restaurant District.

This line services the new neighborhood of Seabright, connecting to Westside Road where other metro lines are available.

The newest and final Kitania Metro line, which runs on an express route parallel to the 10 Line.

This shuttle connects the Restaurant District with areas across the freeway. It now serves as a connetor between the 1 and 2 and the 3.

This shuttle connects Tacolympic Memorial Blvd, a major terminal, to the end of the road its named after.

This connects Lemon Road to Bus Complex West without having to go out of way or require the construction of an elevated 6 Line station.

This shuttle connects the Kitania Space Center station to the northern part of the Space Center.

Lines and shuttles run on corridors, which make up the physical Kitania Metro system. Some corridors, known as trunk corridors, determine the color of the lines that travel on it. These are a list of corridors of the Kitania Metro.

The Freeway Corridor was the first corridor completed, and is the blue trunk corridor. It is underground in the west and central Restaurant District before rising to elevation at Restaurant District East. The local tracks continue at grade in the median of Freeway Lane, with the express tracks above, immediately beneath the Kitania Freeway. The local tracks rise to the same level as the express tracks and terminate at an elevated platform at Tacolympic Memorial Boulevard.

The North Sea Corridor began construction with the Transit Centers, serving both transit centers as the yellow trunk corridor. It is underground from Tacolympic Memorial Boulevard to Void Zone. At Bus Complex West, the inner tracks of the NTC Connector split from the local tracks. The corridor passes through the open cavity of Void Zone, designed similarly to an elevated line, though still underground. It rises to elevation over Kitania Bay at Kitania Landing, where it then heads south. In the West Transit Center, the line goes under I-206. The local tracks lower to grade level and travel in the median of Jerry Boulevard, with the express tracks directly above. The corridor terminates at Jerry Blvd-WTC.

The Residential Crosstown is the second crosstown corridor of eastern Kitania. It originally connected to the North Sea Corridor via the NTC Connector, but now is connected to the South End Corridor, and is the magenta trunk corridor. The corridor starts at Pizza Road at an underground platform, and the two track corridor continues to Residential District, a layered station, with the westbound track remaining at the same level and the eastbound track located below. The corridor continues west to Kitania Space Center, where it rises to grade level and continues as local tracks B of the South End Corridor.

The Northern Connector is a short connecting corridor, and is the orange trunk corridor. It begins at Restaurant District West and continues north to Residential District. From there it goes to Grand Park where it terminates. The entire corridor is underground.

The NTC Connector connects the South End Corridor to the North Transit Center section of the North Sea Corridor. It begins as a two track corridor with tracks A, a contination of local tracks A of the South End Corridor, at Kitania Space Center. The corridor travels north, rising from grade to elevated level, directly above the Downtown Crosstown. At Lemon Road, tracks B begin at an underground platform, with tracks A bypassing the station. Tracks A submerge underground to the level of tracks B, with tracks A running on the inside and tracks B on the outside. At Bus Complex West, tracks A merge with the local tracks of the North Sea Corridor, while tracks B merge into a single track and terminate at a lower level platform.

The Lemon Connector was the first completed corridor in the entire Kitania Metro system, and one of the shortest, serving only two stations. It is an entirely underground corridor, serving Restaurant District West and Lemon Road.