Kaloro City (also Kaloro, KC or for inhabitants "The City") is a citytown built by Needn_NL halfway 2017. It is situated near Norwest, the prime rival for regional power, in the well, north west corner of the map. On the 22th of September 2018, it was decided unanimously that in Winterside the only main language would be Dutch, except for international things, like the B12, which will be signed bilingually, and Kaloro City's primary language will be English, with Dutch being the main language in District 1 (Old Town) and Kalorean being an official minority language next to Kalorean in District 1 and Dutch in all other districts. All other parts of the Union will recieve an official language later. 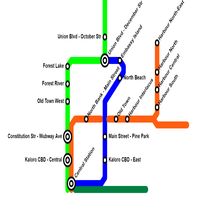 A huge part of the planned network 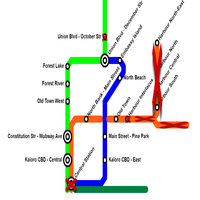 KCPT (the Kaloro City Public Transport) consists at the moment of two active lines: the Union Line, consisting of 5 active stations, and the Omega Line, having 4 active stations. The River Line and Forest Line will remain closed for the time being, as well as Kaloro CBD-Central and all Union Blvd Stations except for Union Blvd December Street for the Union Line, the harbour stations for the Omega Line and Central Station will remain closed now for all lines.

Kaloro City Public Transport is a public transport service of the Kalorean government for the people of Kaloro City and near towns and is operated by Connected. It contains Metro, Train, Tram and Bus services. It's the main public transport provider in the area.

Metro services are cartrail services that connect the suburbs of the city with the city center. Metro's ususally stop at every station on the route. The techniques used for it depend per line. On the Omega Line (Line 1) and the Union Line (Line 2), the station mechanisms are provided by Obi's Redstone at every station except 26 October Street (Union Line). The platforms are 29 long and they spawn 1 cart at a time. Getting in and out of the metro is easy because of the slow speed when driving past a station, but when someone doesn't want to stop at a station they can speed up the process by pushing the button between the two tracks. Because the off-station redstone is simple, a lot of people can spawn there carts in short times. On the River Line (Line 3), the railway technique and some of the station design is by Starcubed Transit Solutions. The platforms are 29 long and can each hold one minecart train with space for 8 people at a time. More will be announced once the line opens.

KaloroRail services are warprail connections provided by the government from Central Station to the suburbs and neighbouring cities and vice versa. Because of the ongoing construction of Kaloro City Central Station, the trains aren't running yet. The rolling stock will be announced here as soon as available.

Bus services will be offered from the Central Station Bus Station to outback areas and areas without access to other public transport. Also, rail replacement buses will be run by KaloroBus.

This Metro Line connects the Kaloro City Airfield (to be built once senator) via Embassy Island and Pine Park to the Central Station. This line was mainly built for tourists and embassy members to visit these places.

There are many stations in and around KC for many types of modalities. Some are only open for inner-city transport, but most stations allow other companies to serve them as well.

Kaloro City, as head of the Kalorean Union, has a lot of Government agencies, of which only a few are listed here.

Kaloro City strives to become a huge and cultural important metropole. To archieve this, but mainly to increase the wealth of the citizens, every once in a while we build a significant project. This is a shortlist of some of the best parts of KC.

We, the Kalorean Political Advisory Committee, supported by the King, decide to change the seat distribution in the Epsilonian Republic. The Urban Kalorean Seats will be for Kalorean Interests, a party to be set up for the time being until a new, wider supported party can be set up. The Seats of Winterside will be distributed as follows: 1 to the Llama Libertarians, 1 to Liberal, 1 to Labour and 1 to the Worker's Party, in that order. This Political Order is to be followed through immediately with Winterside and the Republic of Epsilon.

Thank you to Vennefly and others for providing their templates. If there are questions about my usage of them on this wiki page, please tell me in-game.