Karakarawa is an island in the Northern Ocean that is a part of the town of Itokani. Owned by MinecraftYoshi26, the island was the first settlement for Itokani. The island began construction on February 29, 2020, and was completed on April 8, 2020. 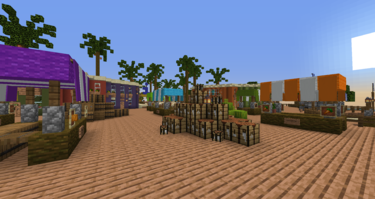 During the early construction, the center mountain was purposefully kept as a nature preserve and surrounded by a jungle plank path. The first major point of construction was the Port of Karakarawa, where the first franchise spaces and docks were built. Following the construction of the dock, terracotta buildings were built at the center of the island surrounding Ulu Lake.

After almost all buildings were constructed in the town, the nature preserve was given a make-over and redone. The trees, like the other palm trees on the island, were placed to decorate the island and make the island more tropical.

On July 29, 2020, the town hall was removed from the Karakarawa Blathers Memorial Museum to its permanent location on the island of Koroturaga.

A number of the buildings' names are references to pop culture, people, and places. AILIX Bar & Restaurant is named after Xilia as Yellowitcher helped build it. Author's Attic is a reference to a franchise from MinecraftYoshi26's other town of Port Scarlet. Cakery Corner is a franchise that is in MinecraftYoshi26's other major towns on the New World. The two tiki bars are named after the two starting tribes in the real-life reality game show series Survivor: Winners at War. Ernest's Abode is a reference to Ernest Hemingway's novel The Old Man and the Sea. Karakarawa Blathers Memorial Museum & Cafe and Nook's Cranny are both named after characters of the same name from Animal Crossing, a video game franchise. Restaurant "the grove" is named after the shopping center of the same name in Los Angeles. The zetterstrand gallery is named after the artist who made the in-game paintings.

Several buildings and stalls are named after puns, such as The Piless acting as a reference to the hotel's original lack of a bathroom.

The only exit from the island is through the port in the southern portion of the island. The Itokani Local Transit boats take passengers to other islands in the city of Itokani. Karakarawa is currently only connected to Waitui by boat.