Kevtropolis is a town at  JN9  Kevtropolis Central in the Northwestern Epsilon Region of the New World. It was founded on August 8, 2018. The mayor is KevAKAtheGr8. The town declared independence a week after its founding. This city is a proud member of Banjaywalking.org

Kevtropolis is currently a democracy with a city council building planned near the town hall. The cities of Birchwood and Sunshine Coast have embassies in the city, and Kevtropolis has an embassy in Birchwood. The city is a member of the Regional Protection Coalition. It is also a member of CK Open Borders, which allows visa-free movement between Kevtropolis and Carnoustie via passport gates in Kevtropolis Central and Carnoustie Grand Central. Although Kevtropolis is an independent state, it is not recognised as one by Spruce Plains as part of a peace treaty to end the city's invasion.

On August 8, 1808, a group of settlers were riding an empty Jungle Line train in search of a new home. They found JN9-the perfect spot for a new town. They immediately named it 凯时间的不是简单介绍一下就会, or Kay time is not a simple introduction of the in English and started a fishing town. It was later renamed Kevtropolis, or 凯城。 This was done due to large request by very confused visitors. A road (Broadway) was built from the MRT station to the edge of a lake, with a curve at the town hall, with many shops springing up. One of these shops on Broadway, was the first Kevmart which is a now growing grocery store chain.

On August 8th, 2018, mi_aquamarine wanted to start a town. With the help of AlfiePops he was able to claim  JN9  Kevtropolis Central . The first building was a 1-room town hall. The start of Broadway was a thin road, with the hill near the MRT station entrance was later known as the "Curve of Death" due to the steep 1:1 slope that had a curve. Some more buildings included mi_aquamarine's house, along with a building for 2 store space. It would later host KBS flagship station NKBS-TV and the first Kevmart.

The first franchises in Kevtropolis was the first Kevmart location, next to the shop building was a location of the small Kevmart-owned gas station chain Fuelco. Fun fact: Fuelco actually opened a couple days before Kevmart did. This period also saw the construction of the second AstroSlurp location. Kevtropolis took advantage of the space underneath the MRT bridge for franchises.

Shortly after Kevtropolis declared independence on 8-15-18, Spruce Plains and mayor shadowboarder invaded Kevtropolis. This was the only time where Kevtropolis military forces engaged in combat. The two troops met just outside the Kevmart building. The city hall had had a large flag constructed on it, along with a cannon. It wasn't all gloom, though, as some events such as Kevmart opening for the first time, along with KRT planning the first bus route. However, it wouldn't be active for a while. A week later on 8-22-18, the two cities signed a treaty with the condition that Kevtropolis would not be recognised as independent by Spruce Plains.

The ongoing #RefreshKT was started as a result of the town failing for [Senator]. Many changes were made, such as lots of changes to traffic signage design. New development was made in the east, such as a zoo, retail space, library, and a suburban area. After the 2019 rules revamp, the Kevtropolis Heliport was made, giving Kevtropolis its first connection to the outside world apart from the MRT.

Although Kevtropolis was not really meant for Ucars in the first place, it does still have strict methods of traffic control. To enforce the no-jaywalking law, crossing signals have secret cameras embedded. Pedestrian right-of-way signs also have cameras embedded into them. Speed cameras also have the ability to sense speeding. However, speed cameras are warned in advance to drivers. If the artificial intelligence detects an offence, it will secretly sound an alarm to the traffic control centre, which can only be picked up on special radios tuned to certain frequencies. Similar to Carnoustie, Kevtropoplis has strict laws on car fuel. Cars can be hybrid or electric, however fully gas cars are prohibited. The only exception to this are emergency vehicles. To prepare for this law, Kevtropolis Rapid Transit converted from diesel buses to electric buses supplied by AutoDesignZ. Since the law was issued, Kevtropolis has two fuel pump types. E-pumps are electric pumps, marked on the top with a lime E. These are the most common pumps at gas stations. F-pumps are gas pumps for hybrid cars, and are marked by a blue F. These are less common at gas stations, with only one F-pump per station, to comply with laws requiring gas stations to have at least 1 F-pump. 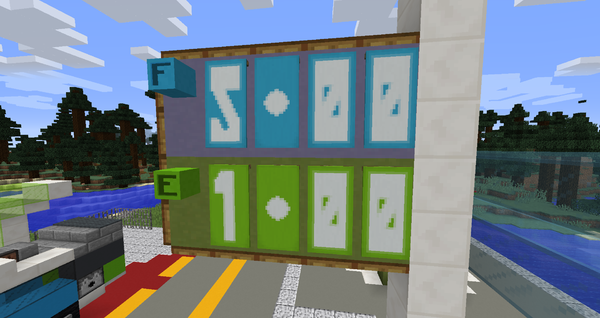 Signs showing prices for E and F type pumps at a Fuelco gas station. The cheaper price for E-pumps are to encourage the use of electric cars. Note that this was before the currency was switched to yen.