Kimberland Mills Shopping Centers, also known as "Kimberland Mills" or "Kimberland MSC," is a company that builds and operates malls and shopping destinations throughout the MRT. It is founded and run completely by time2makemymove, and his company. The corporation was officially founded on April 19, 2018. On that date, it officially began operating Venceslo Village, although the Village’s name was not changed as a result.

It currently has three properties, and is expanding rapidly. If you want a mall in your town, or just want to read about the Kimberland Mills Centers that already exist, then scroll down!

DO YOU WANT A MALL IN YOUR TOWN?? Kimberland Mills is the company for you! 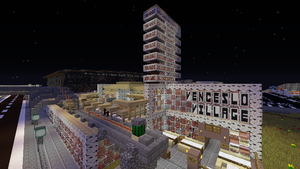 Venceslo Village's Main Building in early December. The Grand BearLodge Venceslo can be clearly seen, as well as the Venceslo Monorail station. 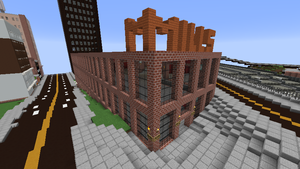 Despite the name, Bakersville Mills Mall is a regional shopping center located in New Bakersville City. Located on the corners of 6th Street, Rector Street, and Canal Street, this mall has three stories of occupiable space, plus a bottom story of underground parking. There are 35 store plots located in the mall. It is primarily made out of brick, to reflect its' existence in new Bakersville's Warehouse District. It was completed on April 28, 2018. It is served by the Mills Place station of the NBTA. 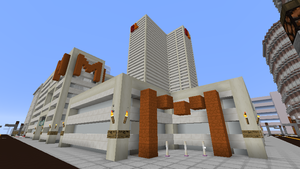 Richville Mills' main campus from the Southeast Corner, between N 1st Street and Park Street. BearLodge Richville Mills can be seen in the background.

A hotel/mall multicomplex, Richville Mills Mall is the first of its kind in the city of Richville. Located between 1st Street, Park Street, 2nd Street, and Franklin Avenue, the mall has 16 shops spanning three floors. It is the first outside mall in Kimberland's portfolio. It is also the second mall of Kimberland's to have a BearLodge hotel connected to it, named BearLodge Richville Mills - the largest hotel in Richville, spanning 17 floors with 54 hotel rooms and 15 apartments. It is located in the very center of Richville's Downtown District, and is walking distance to both RIchville's main parking deck and Richville University. It is a very modern design, build to both stand out amongst the other high-rises in Richville, while also fitting in very well with the city's skyline. It was finished on May 12, 2018.

Located on the northeast side of Whiteley, Whiteley Fashion Center is the first true mall in Whiteley, and one of the largest malls on the server. With 3 levels of shopping space, and one of the largest mall atriums on the server, WFC is truly one of the server's most premier shopping destinations. It is a very modern design, and stands out among the rest of Whiteley; built using a large amount of both quartz, colored concrete, and end rods to achieve this. It was built by both time2makemymove and AP_Red. It was completed on July 12, 2018.

Do YOU want a mall in YOUR town? Well, add your name to the bottom of this list! Prepare to wait a while, though, building these takes time and motivation!

NOTE: When signing up for a Kimberland Mills mall, you are agreeing to these rules: 1) Your town is councillor ranked or above. 2) You give time2makemymove naming rights for the property. 3) You will not make structural to/demolish the property without time2makemymove’s permission. 4) YOU WILL RECRUIT FRANCHISES FOR THE MALL YOURSELF. KIMBERLAND MILLS IS NOT RESPONSIBLE FOR FILLING THE MALL, YOU ARE. 5) You will pay time2makemymove an amount of money that will be determined upon completion of the property (between $100 and $400, depending on the magnitude of the project - usually on the lower side).