Konawa is a Governor city founded by Soleurs, located at C109 and C110 on the MRT Circle Line. Konawa was founded on 11 July 2015 by Soleurs.

Upon being founded on 11 July 2015, a park as well as an information center were built. In the following days, more roads and some modern, new buildings were built by a collaboration of Soleurs and _Kastle. Over time, construction has come and gone in bursts. In August 2015, the town was qualified for councillor status, and construction came to a multi-month standstill. At this point, the city hall and several businesses had been constructed. Two buildings were left unfinished: a half-built house and a restaurant.

In February 2016, construction began again, with the complex now known as Prater Park being built, featuring the Inn and the Great Flower, over 70 blocks in diameter. Also completed was the Daikanransha ferris wheel and the restaurant structure, now the local 150 Central Park. The unfinished house was torn down and replaced with the Konawa Fire Department. Construction also commenced on the Sonamu in what is now the Mountain District. In April 2016, a new house was built in the Tomorrowland District as well as the Great Arch, and the commencement of construction in the Mountain District. Houses built in the sides of hills and mountains were created and put up for sale. On 19 April, the city was promoted to mayor status.

The city doubled in size in just 3 short months, and after a failed attempt at Senator in June, was promoted to Senator status on 18 August 2016 alongside its neighbor Lanark. In September 2016, Soleurs decided to put in an application for Governor to receive feedback on what he should do to improve his city. Konawa was awarded Governor following this on 11 October 2016. Soon after, Soleurs contracted _Kastle to build him an airport.

In November 2016, the Horizon National Airport, along with its connector road, the A90-H, was completed. In April 2017, construction on the second terminal began. In December 2016, the connection to Snowtopic via the A89 was approved, and the A89 began serving Konawa. Following many delays, mostly related to Soleurs' inactivity, the A89 opened on 12 August 2018. In addition, the Hermes Transit Centre opened under Tomorrowland to create a bus hub in Konawa.

Konawa is situated in three biomes: an oak forest, a spruce forest, and a taiga. The oak forest houses the Tomorrowland District, as well as the A90 and its adjoining park and ride complex. Horizon National Airport is also situated in this biome. The taiga houses the headquarters of the ruling nation, the Plurinational Democratic Republic of Konawa. And the spruce forest biome houses the remainder of the city. Mostly a hilly area, Konawa has adopted a nonconventional method of town-building, focusing on respecting the flow of the natural landscape, with trees, hills, and ponds common.

Konawa is divided in to several districts.

The Tomorrowland district is the southernmost district, located in the oak forest and primarily constructed by deputy mayor _Kastle, housing modern-style buildings, mainly residential homes, and the Hermes Transit Centre bus hub. The A90 and the A90-H run in this area. Currently accessible from the Anaheim Bridge via Main Street in Central Konawa, and from Lanark by Barrett Boulevard to the A90 Park & Ride, and the A90 itself from Armada, Lanark, and points beyond.

The Mountain district is the northernmost district, located in the hills north of Central Konawa. Currently home to the Room Where It Happens inn and tavern, the B17 road connection to Lanark, and the Lillian Disney Amphitheatre. Originally planned to be a district of houses and businesses housed inside hills and mountains, this plan was shelved when B17 was constructed. The remnants of this district's concept are the Sonamu currently under construction as well as a couple of houses. Rogers Road provides access from Central Konawa and Tomorrowland, while Lamon Lane/B17 connects to Armada, Lanark, and the other districts.

Fowler Gardens is the diplomatic district of Konawa. Fowler Gardens is home to embassies from other cities on the MRT, as well as the Great Konawan Pagoda, a symbol of peace and unity throughout the server and the world. Access to this area is available via Sailaises Street from Central Konawa, and Treiber Trail from West Konawa.

West Konawa is centered around C109 station and is home to some of the newest developments in town, as well as the B17 connection to Armada, and the A89 connection to Whitechapel and Snowtopic.

Konawa is served by all manner of transit options, with many more forthcoming.

This road, signed as the Turley Pike from the curve north of Spruce Plains through Konawa, is accessed via the A90 and the B17. The road provides a high-speed direct connection to Whitechapel and the A8, as well as Snowtopic. This provides Konawa with access to Central City, Laclede, Ilirea, Vermilion, and Kenthurst, among other destinations.

The road itself doesn't directly connect through the city but ends in city limits at the intersection of the A89 and A90. The road primarily exists to connect to Armada and Orio.

Signed as the Ketcher Expressway from its terminus at A89 to A95 in Lanark, the A90 is accessed via Main Street in the south of the city, in the Tomorrowland District. The road provides high-speed direct connections to other major arteries like A1, A89, A90-H, and A95. This provides Konawa with routes to Nippia, Achowalogen Takachsin, Covina, and Liten, among other destinations.

The A90-H, signed as the Perkins Freeway, doesn't directly connect to the city, but is operated by the Port Authority of Konawa & Lanark as part of the Horizon National Airport. The A90-H is the only road access offered to the airport. It can be accessed via the B18 from the A90 Park & Ride and the Ketcher KIT station, or via the A90.

A main artery of transit within Konawa and signed as Lamon Lane within city limits, this road is accessed via several northbound roads in Konawa The road is a more slow-paced alternative to its cousin to the south. The road links the city centers of Armada, Lanark, and BirchView to Konawa.

Konawa is the main hub of the Manukau Bus network. The Hermes Transit Centre in Tomorrowland contains 48 bus platforms, and serves as the main bus terminal in the northwest.

Konawa is connected to Lanark via KIT, and to Laclede and beyond via IntraRail. RaiLinQ connects the city to BirchView to the east, and Armada and beyond to the west. 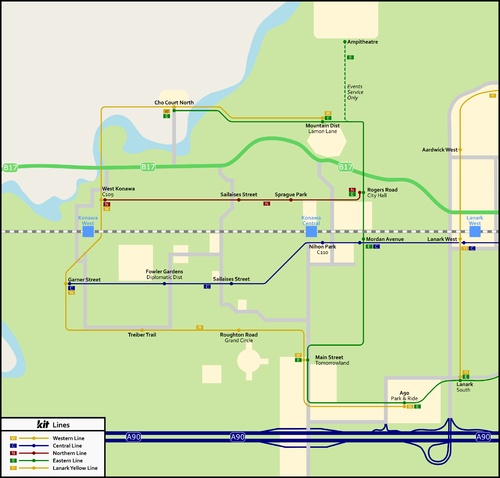 An outdated map of the KIT Metro by AP_Red