Koroturaga is an island in the Northern Ocean that is a part of the town of Itokani. Owned by MinecraftYoshi26, the island was the fourth settlement for Itokani. The island began construction on July 2, 2020, and was completed on August 1, 2020.

Koroturaga is notable for being the capital of Itokani and its main hub for government and foreign relations. 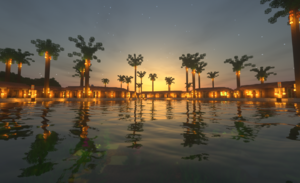 After the completion of Vinataka, the islands of Koroturaga and Waitui were claimed on May 13, 2020.

On July 26, 2020, buildings began being furnished. On July 29, 2020, buildings were fully furnished and being given out to other cities for embassies and other government services. The permanent Itokani Town Hall was also completed on that day. 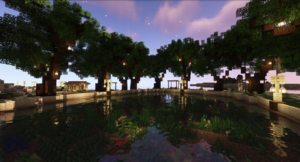 Sipi Park at the southern tip of the island

A number of the places and things on the island are musical references. The two famous brown sheep on the island, Hakura and Glynne, are named after two people related to the Clean Bandit song "Rather Be": Hakura Abe and Jess Glynne. Hakura Abe is the actress that stars in the music video for the song. Jess Glynne is the featured vocalist on the song. The island's three angels are numbered nineteenth, twenty-first, and twenty-fifth, referring to Adele's first three studio albums 19, 21, and 25. The two conference rooms in the Itokani Town Hall, the Okosita Conference Room and the Edua Conference Room, were named after the Fijian words for 'the one' and 'August', referencing two songs on Taylor Swift's album folklore.

The statue in the northeastern most point of the island has the Captain Philip Keoghan statue, named after the host of the real-life version of the reality game show series The Amazing Race.

Koroturaga is located in the Northern Ocean. It is the southwestern island group in the region of Senikau. The island is nearby the Wananavu Reef and is surrounded on all sides by a deep lukewarm ocean biome.

In relation to other settlements, the closest other settlement at the time of completion was Waitui, which was claimed at the same time and is connected by a bridge in the southern portion of the island. 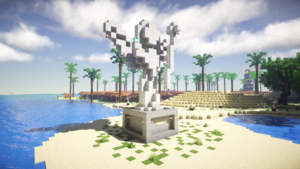 Koroturaga has a total of 24 buildings, not counting the bathroom facilities, with 85 embassies. All of the buildings are for embassies and other government buildings. The island acts as the island chain's capital and also houses the city's town hall.

The island incorporates location focused on nature with the government buildings on the island. Sipi Park is a public area on the southernmost portion of the island that serves as a place for the general public to picnic and relax. The largest lake on the island is Lake Yalodina, which is full of cod like other bodies of water on the island.

The following 85 cities or states have an embassy on the island:

The only exit from the island is through the Wavu Bridge in the southern portion of the island. This island is the first island in Itokani with no Itokani Local Transit boats.