The Lacledic Republic is a state with its capital at Laclede. It was formerly a shared municipality; however, it is now a term used in intercity diplomacy for all the cities owned by jphgolf4321. It has nothing to do with the shared municipality unless otherwise specified.

The story of the Republic begins a year and two months before the opening of the Gamma Server, in August of 2013. This was the month Supreme Chancellor jphgolf4321 (hereafter referred to as the Chancellor) first joined the server as a guest, was accepted as a member, and founded his first city of Splurgeville just east of Arisa. Though Splurgeville's name originally came from a lack of original city name ideas from the Chancellor, it soon came to live up to its name. The Chancellor had the grass that was originally the surface of the city worldedited into mycelium, and he posted a rule in the city hall stating no two buildings could be built of the same material without express permission.

Among the interesting buildings in Splurgeville are the 9/11 Memorial Park, the Twin Towers, the original location of Chief's Bozx-ers, and the first MRT Sumotori Association arena. Splurgeville is connected to the InterMap Highway System by

. A connection to  I-4  was planned and construction of the connection had begun, but was never finished. Splurgeville continued to grow until the Gamma Server launched in October 2014.

On November 24, 2013, Casey_Jones3 offered the Chancellor a plot of land northwest of G9 Station nestled in a valley. The Chancellor graciously accepted and immediately got to work building the first buildings in the town, including City Hall, some small houses, and the only underground MRTSA arena on the server. Other interesting buildings in Chesterfield include Casey's mountain mansion, the original Punchwood Inn, and the Chesterfield Multipurpose Scoreboard. Because the original Chesterfield Valley was small, the town grew to encompass the hills to the west and a larger valley to the northeast. Due to the inactivity of its mayor, Soleurs, Chesterfield annexed Tulsa on May 3, 2014, and incorporated it into the rest of the town by way of a footpath and a chairlift built by nopro_. Chesterfield is the Chancellor's personal favorite of all his Old World towns.

Chesterfield is connected to the rest of the world by way of a helicopter to the Eastern Heliport, the MRT Green Line, and the Northern Trail. A network of third-party rail lines was meant to meet at the Chesterfield Transit Hub, but only one of these lines was ever built.

Founded December 31, 2013, Houghton is the last of the three towns the Chancellor built on the Old World. It is also the smallest one, given that it shares O5 Station with Autotown. It was part of the Orange Line building boom when it originally opened, and it only exists as a result of a compromise between the Chancellor and autobus22 to split the station. Houghton took over the west, and Autotown took the east. Though Houghton is smaller than Chesterfield and Splurgeville, it too contains some landmarks. Among these are the Shell, the first non-MRTSA arena the Chancellor built; the O5 tram, the first metro in any of the Chancellor's towns, and the Five-Seven Line, the first line built by the Redstoneless Metro Service.

Houghton is connected to the outside world by way of the O5 Tram, the MRT Orange Line, the Five-Seven Line, and indirect connections to  I-600  and  I-700 .

After the Chancellor was promoted to Moderator and the final seed for the New World was chosen, Frumple allowed his staff members first pick of land plots. The Chancellor chose T13 station, in the middle of a plains biome, for what would become the capital city of the Republic.

No development was made on the Laclede land claim between its selection and the opening of Gamma. In the beginning, there were only two streets, City Hall, and a few townhouses across the street. From there over the coming months, Laclede grew and was promoted to Senator, at which point Chris Kyle Memorial Stadium and the Laclede Municipal Airport were built. At the time, airfields were allowed to be built at Senator, and when they were banned Laclede's was one of the few deemed realistic enough to continue to exist. During this time the LTA Metro system was begun. Laclede also acquired the rights to T11, T12, and T14 stations in inactive build auctions and integrated them into the city. These new acquisitions, as well as the construction of the Laclede Transit Hub, Sportsmans Park, the Brickhouse, and the first Spleefodrome helped the city get governor. After the Governor promotion, the Spleefodrome was rebuilt, the metro was expanded, Harry S Truman International Airport was built, and the former site of Demonrise was rebuilt as an area for other cities' exclaves. After the exclave fad died with the former site of Demonrise still mostly empty, the Laclede Theater District was built on the site. After a bit of a development hiatus, the Chancellor decided to push Laclede over the threshold of Premier. Kyle Stadium was razed and Roosevelt Stadium was built on the site. St. Francis Xavier Regional Airport, Powell Hall, the National Amphitheater, the National Hotel, and Loyola Field filled out the Theater District. Every unfurnished building in the city gained an interior. At last, Laclede was given Premier, but work didn't stop. Loyola Field was eventually converted from a mixed-use soccer and sumotori facility to a spleef arena. the Spleefodrome became Busch Stadium, a new baseball stadium with a larger field. As such, Sportsmans Park was renovated permanently into a form it had most recently taken for X TacoBurritoAthon - an aquatics facility.

Laclede is the capital and highest-ranked city of the Republic, having risen to Premier. It is governed by Supreme Chancellor jphgolf4321. The city was founded on October 5th, 2014, and is named after Pierre Laclede, the founder of the city of Saint Louis, Missouri. The city occupies  T11  Laclede Theater District,  T12  South Laclede,  T13  Laclede, and  T14  North Laclede. In Laclede are several sports stadiums, restaurants, residences, and various theaters. Laclede has hosted two TacoBurritoAthons, the Fourth Eagle Awards and has aspirations to host the Olympics.

Bandaraya was formerly an independent city founded by TakenName on October 16th, 2014. On November 7, 2015, Bandaraya became part of Laclede, and the former Bandaraya City Hall was converted into a library.

The Lacledic Republic Old World Territories are the cities on the Old World founded by jphgolf4321. They are:

Ravenna is the second New World city founded by jphgolf4321. It is located in the mountainous area northeast of St. Anna.

Hannibal is the third New World city founded by Valkorion314. It is located in a small plains biome in the southeast just west of  A54 .

Laclede is also served by Laclede Municipal Airport, located directly to the south of and predating Harry S. Truman International Airport. The airport is comprised of a small landing strip and terminal building with a single South Weast Airlines flight to Splurgeville Municipal Airport. 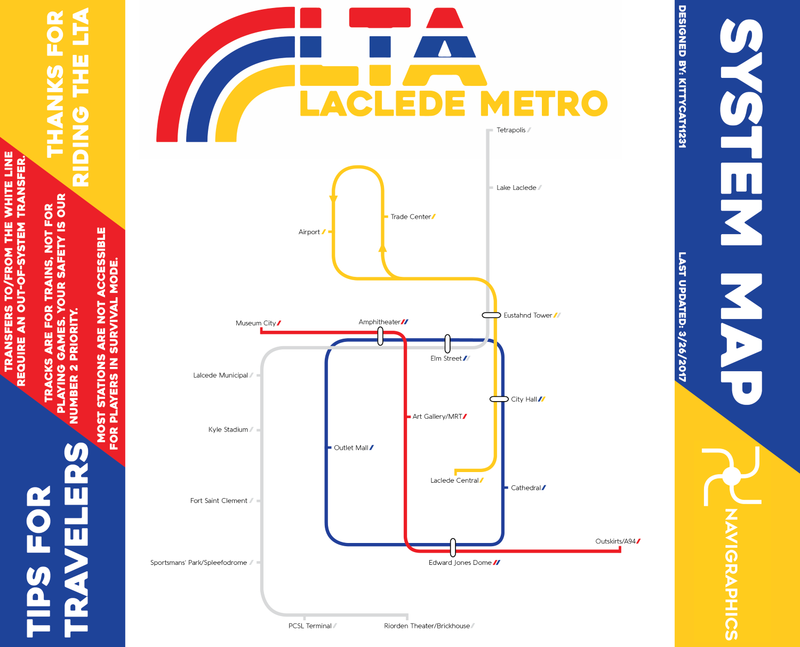 Laclede is connected to the MRT Road Network via  A9 ,

. It also is served by Northern Star Ferries via the Bandaraya Ferry Terminal and an Arrivé bus terminal south of  T13  Laclede.

Grand Military of the Republic

The Grand Military of the Republic is the force that is responsible for law enforcement and defense of the Lacledic Republic.

Grand Army of the Republic

The Grand Army is the main fighting force of the Laclede Grand Military. It operates out of Fort Saint Clement in South Laclede

The Grand Army Infantry consists of a single elite batallion, the 101st Grand Laclede Regiment. It is further divided into the following companies:

Each company consists of 72 elite soldiers who are ready and willing to give their lives in service of the Shared Municipality and its allies, most importantly MATO and the League of Cities

The Grand Army also has one elite armored division, the 2nd Grand Laclede Tank Regiment. It is not divided into companies, but it can be split to carry out multiple operations simultaneously. It consists of

This makes a grand total of 84 armored vehicles, each with an elite crew.

Grand Air Force of the Republic

The Grand Air Force consists of two elite combat wings: One of X-Wing Fighters and another of Y-Wing Fighter-Bombers. They are known as Rouge 1 and Rouge 2, respectively.

Grand Navy of the Republic

The Grand Navy consists of two destroyers, the LRS Luxembourg and the LRS Andorra, and five corvettes: LRS Conch Republic, LRS Sealand, LRS Monaco, LRS San Marino, LRS Vatican City, LRS Kosovo, and LRS Malta. Its mission is to patrol the Seneca Canal and the seas it connects and defend the Republic's interests overseas. The Grand Navy also considers the LRS Saipan (a carrier) and LRS Nepal (a battleship) among its ranks. They are airships, operating in air support roles where the rest of the Grand Navy cannot aid its allies, including in space.