Lakestead, pronounced /ˈleɪkstɪd/, is a town on the MRT based in the New World Ward 4, founded, owned and operated by AgustinSuarez. The demonym of the city is Looksteerian.

The name of the town comes from the connection between the two words "Lake" and "stead" (from Old English, meaning a ‘place’ or ‘enclosed pasture’), so it basically means "the place with a lake".
The town's logo and flag are the same, and they are named "The lake's diamond", as it looks like a diamond with four parts: the dots on the left (representing the buildings), the rectangles on the top (representing the mountains), the triangle on the right (representing the lake going around the city) and the icons on the bottom (representing the Looksteerians as the base of the rest of the icon, and subsequently, the town. The people are, according to the founder, "the actual diamond of the Lake"). 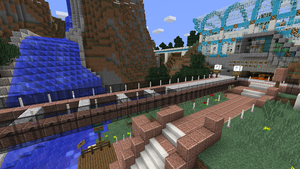 Currently there are two main neighbourhoods in the city: the Old Town and the Business City, these are clearly differentiated by their contrasting architecture. The town's postal code is LK4.

Despite its name, this charming district was built after some of the buildings in the Business City, this is due to the decision of the councilman of urbanism, one of the mains architects of Lakestead, of designing a "small but cosy town that would allow Looksteerians to have a wonderful area where they can walk and live comfortably, in a growing town but with a lack of busyness and stress like major cities' residents".
Inside the Old Town, there are three parallel streets (from west to east: Alpha Street, Guards' Street and Market Street) that connect the Town Hall building and the National Square. 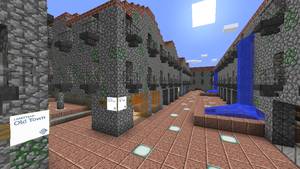 Views of the Old Town's National Square, the heart of the city.

This is the area with the skyscrapers, residential buildings and offices. The economic heart of the town. In the north of the Business City, there is a small area being developed named "Rocky bridge", because of the A4 bridge crossing this neighbourhood.

To move around the city you can use the LMTA (Lakestead Main Transportation Authority) Boat lines (B01 and B02, connecting the Central Station with both the Old Town and the Business City via Rocky Bridge). A Metro line (L1) is still under construction and no opening date is known yet.