Lapis Bay Expo East Airport (IATA: LBX, ICAO: LPBX) is an airfield serving Lapis Bay and its satellite city Lazure, located 300m from the Venessa Bay district of the city. The airport is home to the 3rd civilian diagonal runway on the server after Las Playas International Airport and Polytan International Airport. The airport was named by SimonScholar after the MRT Expo East Line Extension, which was built by Simon and is currently the only airport located in the extension. 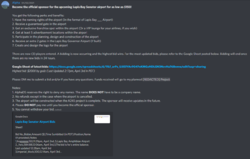 Planning began soon after Lapis Bay reached Senator, with the location selected on the same day. Despite the promotion, AlphaDS decided to set aside the airport and focus on the A245 as the construction of the road had been delayed for over a year. No progress was made until April of 2021.

On April 2nd 2021, AlphaDS announced in Discord that the airport is looking for a sponsor. He needed a new name for the airport as he wanted to use Lapis Bay International Airport for the future Governor airport. The sponsor would receive various perks including the naming rights of the airport. On April 4th 2021, SimonScholar outbid the second bidder by $1400 and became the official sponsor of the airport. Simon transferred the gates to IntraAir and did not claim the other perks, stating that he was "only interested in the naming of the airport". The airport would remain untouched for the next few months as Alpha continues to work on A245. 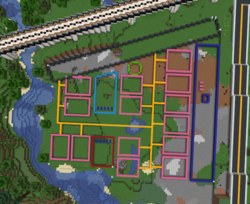 The finalized layout of the airport

In late September, AlphaDS asked HarborRandom852 if he should continue working on the road or start building the airport, as he was running out of interest. Harbor suggested building the airport as it was long overdue, and as the road connection between the Expo East region and the main road network was completed, the A245 project was no longer urgent. Planning was restarted soon afterwards, and Alpha wanted to build an airport that is both efficient and realistic. Numerous plans and layouts were discarded because of their lack of efficiency and on September 29th 2021, the airport layout was finalized and groundbreaking took place the same day. Applications for gates opened a few hours later, with each of the 14 gates costing $10. After the allocation of the gates, airlines began pasting in their planes and warps, many of them went into service even though the terminals were not complete. Construction on the first terminal slowed down to a halt because of Alpha's declining motivation and real life distractions. Progress only resumed in mid-2022 amid the 2022 MRT Summer Games hosted in Lapis Bay.

By July 2022, construction resumed in full speed and terminals were completed one after another. By mid-August 2022, all of the structures were fully built and an announcement was sent out in Discord, reducing the price of a gate to $5 as a gesture of goodwill and announcing the scheduled grand opening on the 22nd of August. More polishing work was done in the following week, including a new Doner Plaza location, more signage and facilities as well as a new parking lot. The airport officially opened on 30th August 2022, a week later than the scheduled date.

Lapis Bay Expo East airport is located in the Lantier area within the Odessa District, bounded by the Lapis River to the west and the south, the MRT Expo Line to the north and Maple Avenue to the east. Hills surround three sides of the airport, making landings challenging for novice pilots. With a distance of only 150m, the high rises in the Lakeside Cove District are visible from the terminals.

Situated in a forest bordering a taiga biome, the airport is classified as warm-summer Mediterranean climate (Csb) under the Köppen climate classification. The summer months are dry and warm with daytime highs often reaching into the 30s, while the winter months are wet and chilly. Thunderstorms and hailstorms are uncommon, with an average of 3 stormy days per year. About 43.1cm of snow fall yearly, with most of the snowfall occurring in December and January. Since the airport does not have room for a garage, snow plows are borrowed from the city 3 hours prior a forecasted snowfall.

On January 15th 1987, the airport saw a record snowfall of 47.5cm in a 48 hour period. Airport operations were interrupted causing massive delays and flight cancellations. 3 people were injured as a result of vehicle accident outside the main terminal.

Gate A6 and Baggage Carousel 2 in Terminal A

Lapis Bay Expo East Airport has 3 terminals, namely Terminal A, B and C. These terminals are connected by skybridges above taxiways. The air traffic control tower is located next to Terminal C.

Terminal A is the main terminal of the airport where gates A1 through A6 are located. All arriving and departing passengers must go through the airport border control and security on the first and second floor respectively. Prior to the security checkpoint, the terminal is divided into 2 symmetrical sections. Check-in counters 1 through 6 are accessible via the southern entrance, while check-in counters 7 through 12 can only be accessed using the northern entrance. A variety of amenities can be found within the terminal, including an information desk, DewBank ATMs, children's play area and public washrooms. A Döner Plaza is located on the third floor next to the skybridge, providing dining options to passengers. The Stratus Gardens on the third floor offers scenic views of the airport and the Lantier area.

Terminal B is the smallest terminal and is home to gates B1 through B4. The upper floor of the terminal serves as a passageway to Terminal C. Seating and charging is available to passengers on the upper floor.

Terminal C consists of gates C1 through C2. The terminal adopts an open design that allows natural sunlight to reach the bottom floor. The antenna on the roof was added by DNAmaster10.

The air traffic control tower is off-limits to the general public. It is 31m tall providing a 360° view of the airport and its surrounding area. The airport's weather station is situated on the rooftop of the tower.

A parking metre in the parking lot

The Maple Avenue connects the airport to the Venessa Bay District to the east and the Lakeside Cove District to the south. The drive to the Venessa District is about 2 minutes, and around 1 minute to the Lakeside Cove district. Paid parking is available next to the airport with 24 lots. The cost of parking is $5/hour and $50/day, payable at the 2 parking metres. The maximum parking time is 30 days. Currently, no bus service is available.

A Lapis Metro station is planned to provide service from the airport to the city's numerous districts. It will be an interchange station between the Downtown Line, the Expo Line and the future rail hub. The metro station will be located across the Maple Avenue, where the current BluRail station is situated at.

A future rail hub will be built across the airport, allowing fast and easy access to Lapis Bay's warp rail network and transfers to the rest of the Woodlands and Expo East cities. Currently, passengers can take a pathway across the airport to BluRail's Lapis Bay station, with service available for their 11 Line. Service from IntraRail and RailEast will be available at a later date.