The Lillian Disney Amphitheatre is a show venue located in Konawa. It is designed primarily to host firework shows produced and run by Soleurs, as a part of Second Star Creative Entertainment.

The amphitheater is named after the wife of Walt Disney, in keeping with the theme of Disney-related names for the amphitheatres created to host Soleurs' firework shows.

The next production was set to be Remember... Dreams Come True, which was set to open on 11 August 2018.

Planning for the amphitheatre began on 18 July 2016 as a collaboration between mustang_guy and Soleurs, to host the firework shows Soleurs was wishing to run on the MRT. Having previously worked together on multiple other amphitheaters on the Minecraft Transit Authority, the requirements for the shows, and expectations for the environment were well established, which made planning much easier. It was decided that this new amphitheatre would need to be larger than the previous ones, have better and more realistic aesthetic qualities, be easier to access and modify redstone, and provide more versatility for the various shows that will take place.

Construction began in secret in the Lab World on 22 July 2016. The purpose and owner of the venue was not to be revealed until the amphitheatre was fully complete and pasted into its final location. By August 1st, the main structure and seating was complete. Next to be installed was the scenery area in front of the launch area. This area contains a small cabin and rock formation which was constructed with the help of Benie and Suppoe. By August 8th, the amphitheatre was fully completed and ready to be pasted in. In mid August, the amphitheatre was pasted into the northern area of Konawa and its purpose and owner was revealed. After it was pasted in, a rail line connection via KIT was made to the amphitheatre, providing the sole means of transportation to the venue. Landscaping and scenery were added to the exterior shortly thereafter, to better integrate the amphitheater into the surrounding land. The first show held at the amphitheatre was on 8 October 2016. The original show, Wishes, made its Konawa debut on 5 November 2016 after playing on 4 servers and in Fairfax.

On 1 June 2017, Lillian Disney Amphitheatre underwent an expansion. The original entry-way was completely demolished and replaced with a large foyer that enclosed the KIT station servicing the venue. It is complete with a large chandelier, (formerly having) dual fountains, and a vast window looking out to the entry pond. About a year later in July 2018, plans from this expansion to add patio seating to the amphitheatre were finally realized by converting the roof of the east and west dining areas to patios.

Throughout August and September 2018, extensive renovations took place at Lillian Disney Amphitheatre. The biggest change brought about by this renovation was the removal of the "cabin in the woods" scenery that formerly served as the foreground for the shows, and replacing it with a new "castle in the woods" foreground. This new scenery was designed to better integrate into the theme of the shows performed at Lillian Disney Amphitheatre, as well as provide more room for new effects and capabilities in the shows. Another major change was the replacement of the birch wood found throughout the amphitheatre with spruce and dark oak wood, to better blend in with the rest of the architectural theming in Konawa. Additionally, the foyer was once more redone to open up the space and install a statue. This statue is of the cartoon plane featured in the Walt Disney Animation short "Plane Crazy", of which the namesake of this venue, Lillian Disney, did significant work on as an ink artist. Smaller backstage renovations also took place during this time to improve, correct, and expand things that after 2 years in service were no longer adequate. 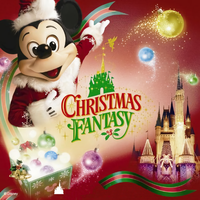 The poster for A Christmas Fantasy.

A Christmas Fantasy is the trilogy of Christmas fireworks shows presented during the holiday season. The three shows were originated at two Magic Kingdom-style parks, as well as Disney California Adventure.

Both of the active shows closed on 23 December before Soleurs took a leave of absence for vacation.