The original station in Lochminehead was built in 2017 under contract to the United Cities Transit Committee, as part of the committee's directive for a line to Lochminehead after its mayor, DJMC2000, had requested service. IntraRail was assigned to build and operate a line between Lochminehead, Dabecco, and Siletz, where the company was building Siletz Salvador Station, which was to be a major IntraRail hub. The line was to be a portion of IntraRail's larger planned corridor from Siletz into the Achowalogen Takachsin/Covina area. IntraRail constructed the station, which was a four track underground station with a mezzanine level, designed to fit IntraRail's passenger trains.

However, IntraRail soon entered a period of hiatus which lasted for more than a year. At IntraRail's request, the United Cities Transit Committee transferred the line to BART, and later transferred it again to Fred Rail, which completed construction of the line and operated it via its Lochminehead Limited service. Fred Rail's trains were oversize for the station, and the company deepened its tracks, shortened the platform width, and increased the length of their platforms to accommodate their trains. 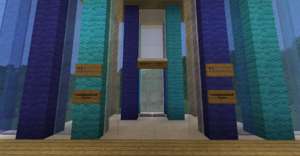 In October 2018, the United Cities officially dissolved, and the organization's assets were transferred into private ownership. The United Cities Transit Committee decided to transfer the station in Lochminehead to IntraRail, as the original builder of the station, despite Fred Rail receiving ownership of the line it operated to the station. Beginning in late 2018, IntraRail explored options for a resurgence in development, and its first new infrastructure project since it entered hiatus was a line extension from Waterville to Larkspur. While awaiting staff approval for that line, IntraRail decided to revisit its 2017 plans in the Siletz area, and elected in January 2019 to completely rebuild Siletz Salvador Station, which had never been finished and was in a mostly disused and dilapidated state, with Fred Rail's Lochminehead Limited remaining as the only passenger service at the station. IntraRail, which owned both terminus stations of Fred Rail's train service, offered to purchase the Lochminehead Limited, but the offer was declined.

IntraRail tore down the old Siletz Salvador Station, built a brand new station in its place, and revived its 2017-era expansion plans, transforming the old, disused terminal into one of IntraRail's most important hubs. After the first trains began service to the new Siletz Salvador Station via extensions from Segville and Matheson, IntraRail's next project was to connect Siletz to BART's passenger rail corridor through Achowalogen Takachsin and Covina, connecting at the large passenger rail station at Achowalogen Takachsin-Covina International Airport. Lochminehead was slated to serve as the main intermediate stop between Siletz and ATC, and plans to rebuild and expand the original station were made. The station, while maintaining Fred Rail Lochminehead Limited service, was to have two IntraRail services: the Frederator, which would parallel Fred Rail's line with service to Dabecco and Siletz, and the Imperial Service, which would have direct southbound service to Siletz and further points south, and northbound service to ATC and further local service through Achowalogen Takachsin. Additional IntraRail express services would bypass Lochminehead without stopping en route between Siletz and ATC. In addition, tracks were to be built for Network South Central, which had requested service to the station. 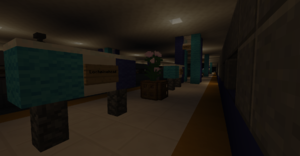 However, Lochminehead mayor DJMC2000 was inactive at the time, and IntraRail could not receive timely approval for its plans. As the lack of construction permits was holding up construction on a critical IntraRail corridor, the company decided to reroute its Siletz-ATC corridor to bypass Lochminehead, with a new station in Woodsbane serving the purpose which Lochminehead was originally intended to serve. IntraRail still planned to rebuild the station in order to build tracks for Network South Central and properly fit Fred Rail's oversize trains, but the plan was delayed by DJMC2000's inactivity. Network South Central was temporarily granted one track at the station until the station could be rebuilt with more tracks.

In March 2019, the mayor of Lochminehead responded to IntraRail's request and granted permission for the station to be rebuilt, however the project was delayed in lieu of other IntraRail projects and due to IntraRail CEO KittyCat11231's lack of available time. In May, the company decided Lochminehead would be its next project following the completion of its master plan for service in the Siletz area and east of Central City that it had begun work on in January. The old station, which still carried United Cities branding, was torn down, and the new, larger station, was built in its place. IntraRail decided to name the station Lochminehead Trijunction, as it was built as a connection point between IntraRail, Fred Rail, and Network South Central. Fred Rail was the first company to begin service to the new station, resuming Lochminehead Limited service on the day the station opened. IntraRail followed suit the next day, extending its Joeliner service from Scarborough and Siletz. Network South Central is still planning and constructing its lines to Lochminehead Trijunction.

Lochminehead Trijunction is an underground passenger rail station, with 8 tracks across one track level. Each track is designed specifically with the company it was built for in mind. The two tracks for Fred Rail are the longest, and include a gap between the track and the platform and a platform raised above the track in order to support Fred Rail's 5-wide trains. The tracks for IntraRail and Network South Central are both designed for 3-wide trains, with IntraRail's tracks being longer to support the companies' differing train lengths. Network South Central's tracks also include an overhead centenary wire to power electric trains.

Elevators from each platform connect to a mezzanine above the platform level, which includes company and destination listings for each track, advertisements, and elevators to ground level. At ground level, the station entrance is located on the first floor within Lochminehead's Plaza Centre building.

Lochminehead Trijunction was specifically built to meet the needs of IntraRail, Fred Rail, and Network South Central, with no additional accommodations. As such, no requests by other companies for service to the station will be entertained. Rail companies wishing to open service to Lochminehead should speak with mayor DJMC2000 to inquire about building their own stations.

Companies specifically looking for a connection point with other rail services may look to Siletz Salvador Station, another IntraRail-owned station in Siletz to the south, which acts as IntraRail's main regional hub and is open for use by third-party companies.