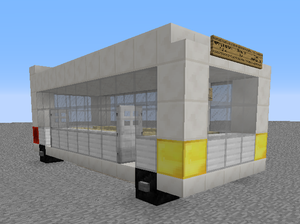 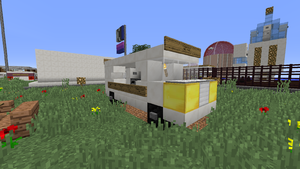 A Frumpmobile Taco Truck in Kitania on the old world. 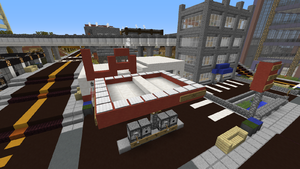 Mundzpreneurship Holdings, LLC, doing business as MP Holdings and often shortened to MP LLC, is a conglomerate founded by Diemundz on May 15, 2016 in order to manage his various companies, franchises, services, and entrepreneurial endeavors on the MRT server. The company is currently headquartered in the Crescent Building in Downtown Farwater.

MP Holdings rents office space in their headquarters building to aspiring entrepreneurs looking to run their own businesses. Prices vary depending on how much office space is used. Contact Diemundz for more information or to rent an office space.

Nationally Operating Regional Interurbans, known as NORI Interurban for short, was an interurban rail transit company founded by Diemundz on the old world on July 29, 2013. NORI was a network of independent interurban lines designed to connect two major cities and/or MRT stations on the map in the fastest way possible. NORI Interurban was headquartered in Skyscraper City at  B21  Skyscraper-Arden. Rail line construction was put on hiatus in fall 2013, and the service began to be phased out in favor of bus lines by early 2014.

Due to the various technical and political problems which have plagued NORI rail lines over the years, as well as a lack of ridership demand, the service is no longer being actively maintained by MP Holdings. NORI Interurban was officially discontinued by Diemundz on December 14, 2015.

NORI Bus was a continuation of the NORI Interurban transit service on the old world, which utilized bus warps in favor of slower, bulkier minecart-based rail systems. Bus services were created in early 2014 due to a popular demand by riders and an increase in popularity of bus warp-based transit systems at the time. As with its rail-based counterpart, NORI Bus was headquartered in Skyscraper City.

Due to the migration of server warps with the transition to the new world, all NORI Bus warps were reset on October 4, 2014. The warps were never recreated due to a lack of ridership demand, and NORI Bus was officially discontinued by Diemundz on December 14, 2015.

The NoriMark Motor Company is a bus manufacturing company on the which sells biodiesel and CNG-powered buses for transit applications. Its primary customer was NORI Bus, however, the company continues to accept orders for vehicles from other players and transit companies on the new world. The NoriMark Motor Company is headquartered in Skyscraper City, and is currently under joint management by both Diemundz and Nopro988.

CreeperCola is a multi-server fast food franchise founded by Diemundz in late 2012 and first constructed on the MRT server in July 2013. CreeperCola specializes in serving premium freshly-made handcrafted beverages, such as sodas, potions, waters, and more. CreeperCola is currently headquartered in the CreeperCola Tower in Skyscraper City at  B21  Skyscraper-Arden, and has a multitude of locations on both the old and new worlds. All CreeperCola Restaurant locations, including both prefabricated and custom designs, are built without the assistance of WorldEdit.

DJD Records is a recording studio originally founded in Skyscraper City by Diemundz, since then a branch studio and office facility has also been opened in Westside Farwater. DJD Records aims to support the needs of musicians and bands during long recording sessions by offering amenities such as lounge areas and hotel rooms in addition to the standard recording and editing equipment.

The Frumpmobile Taco Truck Company is a small chain of taco trucks, with locations in Skyscraper City, Crystal City, and Kitania on the old world, as well as a truck in Westside Farwater on the new world. The trucks specialize in serving a variety of Mexican food dishes, and all vehicles are equipped to serve CreeperCola beverages.

LiterAlly operates a chain of gas stations in towns owned by Diemundz. The company was originally founded on the old world as the Dieselmundz Gas Station, with the first location built at the Skyscraper City Rest Stop in the middle of InterMap  I-1 . The company underwent a rebranding and redesign on October 4, 2014, when the first LiterAlly-branded gas station was constructed in Downtown Farwater; the existing Dieselmundz Gas Station was rebranded "Dieselmundz by LiterAlly". LiterAlly currently operates a total of 4 gas stations: one in Skyscraper City, and three more in Farwater's various neighborhoods.

Mundzlist is an online tool developed by Diemundz to help make buying and selling things such as items and properties on the server easier. Its name is derived from the online classifieds service Craigslist, and the service functions in a similar manner. Anyone can post listings to sell various things and, if interested, buyers can then contact the seller in-game to arrange a deal and meet up to perform the transaction. Players can use this tool in a variety of different ways, including offering money to players to build franchises in their town, listing houses or other real estate properties for other players to buy, and selling companies, franchises, or rare items.

Diemundz' Pancakes is a chain of breakfast restaurants which was started by Diemundz in 2016. The franchise serves competitively priced breakfast foods such as pancakes and waffles; all restaurants are also equipped to serve CreeperCola beverages. Currently, locations are only open in the cities of Farwater, Washingcube, Dabecco, and Matheson. Restaurants come in one size with dimensions of 10 x 9 x 4, not including exterior signs, and have a base starting price of $10.00.

MP Holdings strives to provide the best customer service possible. If any aspect of our currently supported companies requires major maintenance, relocation, and/or removal, please contact Diemundz rather than attempting to resolve the problem yourself, as all buildings are private property and it may result in a warning. If you encounter a problem with one of our products or services, please contact us with the location of the incident and we will attempt to resolve the issue as quickly as we can. We apologize beforehand for any inconveniences that may negatively affect your experiences with MP Holdings products and/or services.