The rules are the same as the Forest Mini-Golf rules with some exceptions.

If you intend to put your score on the wiki, please ensure that you follow the following rules for Mini-Golf:

Below is a table with the list of all official MGA recognized courses. These are the only courses that official tournaments (and other competitions giving out points, such as 1v1s) may be played on. This program officially started on May 7, 2018. 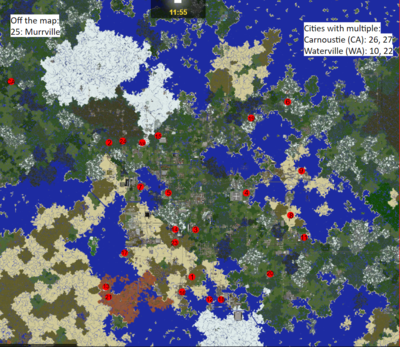 Outdated: The location of all MGA courses. Click to view in a larger image

At the February 2018 GSM, staff members were hesitant to give the MGA the requested funding. Instead, they gave the organization a chance at a debut tournament, and if it got proper attention, they would then continue to fund the organization.
The final scoreboard can be found here: AirKirdé-North Coast Championship

Overall, the event went well enough and staff decided to approve the MMB Cup at the May 2018 GSM. This recognized the start of the MRT Golf Association's first season

This minigolf category has no leaderboard like the season ones above, instead it's play for cash prizes (prize fund is assembled by sponsors). Currently, the recent tournament held in New Amsterdam (XenRail Open) at The 18th Mine is the first tournament to apply this new category. 5 players played the course (except mdbro55 had to leave after hole 6), the 1st, 2nd, 3rd, 4th and 5th placed players are listed below: