The MRTvision Screenshot Contest is a server-wide screenshot competition held among the cities of the MRT server. Each participating city submits an original screenshot to be shared publicly, then all participants and the public casts votes for the other cities' screenshots to determine the winner. All ranked cities are currently eligible to compete as long as they meet the requirements. 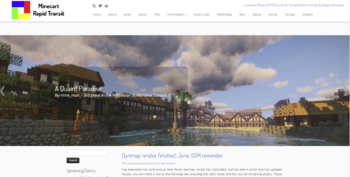 Participant cities submit original screenshots, all to be shown to the public. Renders are accepted. A "city" as a participant is represented by one member: typically and preferred, but not always, that city's mayor. States may participate to embody many cities; however, any cities in that state may not partake. A player may only represent one city and have one final screenshot.

During a specified period, the cities' participants then proceed to cast votes for the other cities' screenshots: participants are not allowed to vote for their own screenshot. At the end of the designated voting period, the screenshot with the most points is declared as the winner. The winner receives the prestige of having won, hosting or choosing the next competition's venue for the ceremony, influencing the slogan, and between $3,000 and $5,000. Second place receives $2,000 (formerly $3,000 for the first contest) and third place receives $1,000. For the first two contests, the top 12 were featured on the website. From the third contest on, the top 10 were featured on the website.

The contest is held approximately every three to six months.

Cities may choose to join by filling out the provided form to join before the deadline. From the first to the fourth contest, cities confirmed their participation to the producer(s) to join. The city must be on the New World and have a flag. Members who opt to run under a state must have at least one of the state's constituent cities must be on the New World. The city also must be ranked; however, there is some flexibility. For members who own a town that is unranked and have no other ranked towns, they may enter their town as long as they fit the other requirements. If a member does not have any towns, then they may represent someone else's town. For example, chiefbozx owns Vermilion and Schillerton, but could only represent one and have SilverWolv, who does not own a town on the server, represent another. Such is allowed specifically as an option only for members who do not own towns. In certain circumstances, the mayor of a town can elect their deputy mayor to represent their city.

All entrants receive between $10 to $20 for full participation by voting, regardless of placement.

As of the seventh contest, 87 cities with 77 members have participated at least once. Italicized cities refer to a new city participating, but not with a new member. The cities are listed here alongside the contest in which they made their debut:

Beginning in the second contest, the winning city typically hosts the following contest. The venue is required to have a stage, seating for viewers, and an optional location for a camera. Host cities and venues have sometimes been chosen from a pre-released list of venues in all New World towns owned by the winner of the previous contest. Some venues have been built or refurbished as a direct result of the contest, including the Champion's Bowl in Arcadia.

The only city to have hosted the contest twice is Arcadia in fifth and sixth contest.

The original logo used from the first contest to sixth contest

The original contest was proposed with all screenshots required to be taken in the prior winning town; however, after GSM discussion, this was removed before the first contest occurred. Before the second contest, MinecraftYoshi26 and host city owner Cortesi discussed a possible idea of a theme for all screenshots. After a poll was put on Discord, it was decided that there would be no theme. Although the poll showed a slight majority wanted a theme, MinecraftYoshi26 stated that they had come to this decision because they "want to not limit the people participating and avoid people from complaining their photo was rejected on the grounds of not fitting the theme".

Each contest's logo contains the generic MRTvision Screenshot Contest logo often with another design. The original generic MRTvision Screenshot Contest logo that was edited by MinecraftYoshi26. The current generic logo is an edited from the logo for the MRTvision 2017 Song Contest created by MikeRoma. The slogan and logo are typically used to plan and formulate the show's visual identity, including the logo, broadcast, and scoreboard coloring.

The slogans for each contest are listed below: 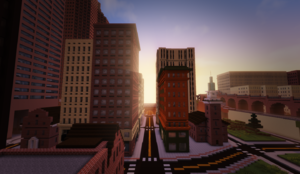 Competing under the town of Boston in the sixth contest, FredTheTimeLord took this photo of his town on a copy of the New World on single player.

The screenshots can be of anywhere on the MRT server, not just the town that a participant represents. Editing photos, such as photoshopping or using Lightroom, is not allowed; however, using texture packs that do not majorly alter the photo's contents and shaders are allowed. Cropping screenshots is allowed. The screenshot may contain any subjects (including structures, towns, cities, landscapes, players, mobs, etc.), as long as it is within server rules. The Heads-Up Display (HUD) must be hidden in submissions. Screenshots are allowed to be rejected on any grounds by the producers.

Screenshots are allowed to be taken off-server on a copy of the MRT world or the beta server; however, the locations must not drastically different than its counterpart on the main server unless explicitly exempted by production.

Each city is allowed to re-submit their entry up to two times after their initial submission during the submission period. Cities would be given approximately two to three weeks of finding a screenshot and submitting it.

Old screenshots are allowed to be submitted as long as they have not been released publicly before. The city's designated photographer can only submit a screenshot taken by them.

The scoreboard used in the fifth contest, with MinecraftYoshi26 announcing the votes from Bahia

Each city receives a draw number that is used on the voting form.