The ceremony took place in the city of Fort Yaxier, following camelfantasy's win at the third contest with the screenshot "One Summer's Day". The contest debuted on June 17, 2019. The contest's slogan was "A Visual Symphony". The winner was revealed on July 27, 2019, at 6 p.m. UTC at Yaxier Symphony Hall. There was an official MBS livestream for both the semi-final and final ceremonies.

The winner was Arcadia with the screenshot "Parks and Recreation", taken by lil_shadow59.

The contest was announced on the wiki on June 15, 2019. The slogan and logo were revealed on June 16, 2019. The logo is an edited version of an online image edited by MinecraftYoshi26. The selection of the cherry blossom branch for the logo was based on the Japanese style of other buildings in Fort Yaxier.

The semi-final ceremony was a part of the MRT's seventh anniversary events and was featured on Frumple's anniversary stream.

The non-qualifiers' placements and point totals in the semi-finals were released on July 26, 2019, following voting being completed for the final. 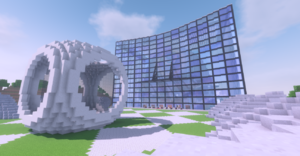 The venue of the contest, Yaxier Symphony Hall, in eastern Fort Yaxier

The contest's results ceremonies took place for the first time in a city in the Republic of Formosa, following Fort Yaxier's victory in the previous edition with the screenshot "One Summer's Day", taken by camelfantasy. It took place at Fort Yaxier's 673-seat hall, Yaxier Symphony Hall, which was constructed in 2017. Located on the east side of the town next to Fort Yaxier Central Station, it is a large, indoor concert hall accessible from an exit off of the A50. It is a large hall inside a larger, glass room.

On June 4, 2019, camelfantasy had confirmed privately that the contest would be held in one of his towns and it was announced publicly alongside the contest's announcement on June 15, 2019. As usual, the venue is required to have a stage, seating for viewers, and an optional location for a camera. Also on that day, four venues from two cities were revealed as possible locations for hosting the ceremony.

On June 16, 2019, Yaxier Symphony Hall was selected as the venue for the contest and Yaxier International Forum Hall C was shortlisted. both in Fort Yaxier. On July 4, 2019, Fort Yaxier withdrew from the contest. Moving the contest to another city was considered; however, it was decided against and the contest would move forward with the venue, logo, and slogan.

As per usual, the contest features members representing cities, each submitting a screenshot to be voted on by the participants and the willing public. Each city and willing non-participants award a set of 12, 10, 8–1 points to their 10 favorite screenshots, respectively. Each participant is required to vote. Failing to vote or voting strategically can result in the participant facing disqualification or a possible ban from participating in future contests. Similar to most of the previous contests, there was no theme.

The deadline to join was revealed on June 29, 2019, at 7:00 p.m. UTC. The deadline to send in a screenshot was on July 6, 2019, at 6:00 p.m. UTC. After the semi-final ceremony, the draw order was selected for the final and voting opened for the final near the end of the ceremony. The winner was able to influence the slogan for the next contest, chose the next host city, and received $4,000. Second place received $2,000. Third place received $1,000. All competitors received $15 as a participatory stipend for voting. The top 10 were be featured on the website. 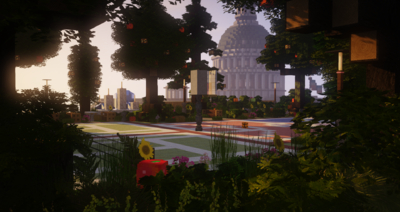 lil_shadow59, representing Arcadia, won with the screenshot "Parks and Recreation".

18 cities participated in the first semi-final. As the prior winner, Fort Yaxier was allocated to vote in both semi-finals; however, it withdrew on July 4, 2019. The highlighted cities qualified for the final. The results were revealed on July 13, 2019, at 6:30 p.m. UTC following the Big Brother 4 finale.

19 cities participated in the second semi-final. As the prior winner, Fort Yaxier was allocated to vote in both semi-finals; however, it withdrew on July 4, 2019. The highlighted cities qualified for the final. The results were revealed on July 13, 2019, at 6:30 p.m. UTC following the Big Brother 4 finale.

Raymont was originally allocated to participate in the second semi-final as draw number 15, but withdrew from the contest due unavailability.

20 cities participated in the final, with all participating cities required to vote. Fort Yaxier automatically qualified for the final as the prior winner and was selected as draw number 18; however, it withdrew on July 4, 2019. The results were revealed on July 27, 2019, at 6 p.m. UTC. The top 10 cities had their screenshots featured on the website.

a. ^ Voting was set to close on July 26, 2019, but closed two days earlier as all of the votes were submitted.
b. ^ The screenshot was taken at the MRT Marina on the New World, which is not considered a city due to the lack of a mayor.
c. ^ The screenshot was taken on the Lab World.
d. ^ While Euphorial and Seoland both finished with zero points, Euphorial is listed as finishing "ahead" of Seoland due to the tiebreaker rule that favors the screenshot latest in the draw order.