The ceremony is planned to take place in Covina, following _Kastle's win at the seventh contest with the screenshot "Like a Shooting Star, I Will Go the Distance". The contest debuted on February 25, 2021. The contest's slogan is Paint The World. The winner is set to be revealed on April 3, 2021, at 7 p.m. UTC at the Covina Ellipse Theater. There is planned to be an official MBS livestream for both the semi-final and final ceremonies.

As of March 1, 2021, 28 cities have confirmed their intentions to participate in the contest and 8 of those cities have made a submission.

The contest was first teased on February 14, 2021 by MinecraftYoshi26 posting "screenshot contest soon? 👍 or 👎" in the #event-announcements channel in the MRT Discord. The message garnered 31 thumbs up reactions from other members and the contest was confirmed on the wiki later that day. The host city was announced as Covina on February 18, 2021.

The contest's slogan and logo were announced on February 24, 2021. The contest's logo is an original work created by RacCort. 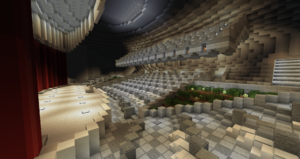 The venue of the contest, the Covina Ellipse Theater, underneath a train station in northern Covina

The contest's results ceremony are planned to take place for the first time in Covina, following Covina's victory in the previous edition with the screenshot "Like a Shooting Star, I Will Go the Distance", taken by _Kastle. The host venue was announced on February 27, 2021.

It is set to take place at Covina's 270-seat theater, the Covina Ellipse Theater, which was renovated in 2021 for the contest. The theater had no official name until the renovations were complete for the contest. The entrance to the theater is located inside a train station, which was originally constructed in Wampanoag by bryce_am. To get to the entrance from the station, an underground tunnel was created to give access to the theater from the train station platform. Located on the north side of the town, it is the only venue of its kind in Covina. The closest transit to the theater is the RaiLinQ and Fred Rail trains at the stations outside of the entrance. ATC-1 is also right outside of the station.

Per usual, the contest featured members representing cities, each submitting a screenshot to be voted on by the participants and the willing public. Each city and willing non-participants award a set of 12, 10, 8–1 points to their 10 favorite screenshots, respectively. Each participant was required to vote in their semi-final or may face disqualification, being banned from participating in future contests, or paying a fine. As usual, there was no theme.

For the fourth time, there were pots created for semi-final allocations drawings. The semi-finalists were allocated into pots, based on aggregate rankings by participant, not by city, from prior contest data. Drawing from different pots helps to reduce the chance of lopsided semi-finals by predicted placement from prior contests.

A to be determined number of cities are set to participate in the first semi-final. As the prior winner, Covina voted in both semi-finals. The highlighted cities qualified for the final. The results are set to be revealed on March 20, 2020 at 7 p.m. UTC.

A to be determined number of cities are set to participate in the second semi-final. As the prior winner, Covina voted in both semi-finals. The highlighted cities qualified for the final. The results are set to be revealed on March 20, 2020 at 7 p.m. UTC.

21 cities are set to participate in the final, with all qualifying cities required to vote. Covina automatically qualified for the final as the prior winner. The results are set to be revealed on April 3, 2021 at 7 p.m. UTC. The top 10 cities will have their screenshots featured on the website.

The following cities participated in the seventh contest, but have not yet announced whether they will participate in the eighth contest:

a. ^ Port Locke is the closest city to the location photographed.